Scientists have solved decades long puzzle about lithium, an essential metal in cellphone and computer batteries. Using extreme pressure experiments and powerful supercomputing, the international team has unraveled the mystery of a fundamental property of lithium. Its atoms are arranged in a simple structure, and may be the first direct evidence of a quantum solid behavior in a metal.

Until now, all previous experiments have indicated that lithium’s atoms had a complex arrangement. The idea baffled theoretical physicists. With only three electrons, lithium is the lightest, simplest metal on the periodic table and should have a simple structure to match.

The new study combined theory and experimentation to discover the true structure of lithium at cold temperatures, in its lowest energy state.

Image shows the structural phase transitions in isotopes of lithium as function of pressure and temperature. The lowest energy state has a simple cubic structure (fcc) and is synthesized at low temperature and pressure by decompression of lithium from high pressure. The two isotopes showed different structural phase transitions during cooling under pressure. The differences observed is characteristic of quantum solid behavior. PHOTO CREDIT: Weizhao Cai

Scientists suggest that rapid cooling led lithium atoms to arrange themselves in complex structure and resulted in misinterpretation of the previous experimental results. To avoid this, Shanti Deemyad, associate professor at the University of Utah who led the experimental aspect of the study, applied extreme pressure to the lithium before cooling down the samples.

Deemyad’s research group prepared the lithium samples in tiny pressure cells at the U. The group then traveled to Argonne National Laboratory to apply pressure up to 10,000 times the Earth’s atmosphere by pressing the sample between the tip of two diamonds. They then cooled and depressurized the samples, and examined the structures at low pressure and temperature using X-ray beams.

The researchers looked at two isotopes of lithium — the lighter lithium 6 and heavier lithium 7. They found that the lighter isotope behaves differently in its transitions to lower energy structures under certain thermodynamic paths than the heavier isotope, a behavior previously only seen in helium. The difference means that depending on the weight of the nuclei, there are different ways to get to the lower energy states. This is a quantum solid characteristic. 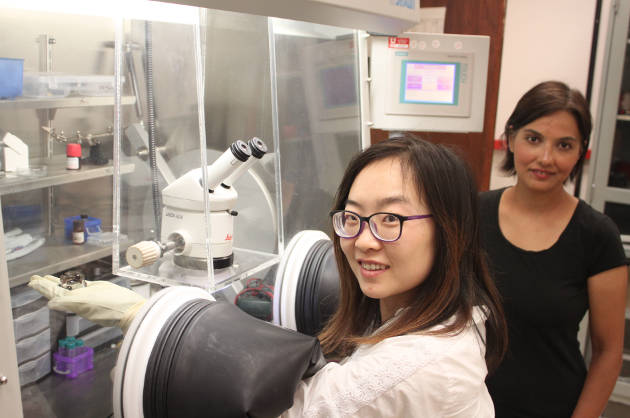 Graeme Ackland, professor from the University of Edinburgh, led the theoretical aspect of the study by running the most sophisticated calculations of lithium’s structure to date, using advanced quantum mechanics on the ARCHER supercomputer. Both experimentation and theoretical parts of the study found that lithium’s lowest energy structure is not complex or disordered, as previous results had suggested. Instead, its atoms are arranged simply, like oranges in a box.

The study, from the Universities of Edinburgh and Utah, was published in Science.

Corresponding author Deemyad of the University of Utah Department of Physics & Astronomy, said: “Our experiments revealed that lithium is the first metallic element with quantum lattice structure behavior at moderate pressures. This will open up new possibilities for rich physics.”

Co-author Miguel Martinez-Canales of the University of Edinburgh School of Physics and Astronomy, said: “Our calculations needed an accuracy of one in 10 million, and would have taken over 40 years on a normal computer.”

Lead theoretical author Graeme Ackland of the University of Edinburgh School of Physics and Astronomy, said: “We were able to form a true picture of cold lithium by making it using high pressures. Rather than forming a complex structure, it has the simplest arrangement that there can be in nature.”