*Brown University physicists have set the strongest limit for the mass of dark matter, the mysterious particles believed to make up nearly a quarter of the universe. The researchers report in Physical Review Letters that dark matter must have a mass greater than 40 giga-electron volts. The distinction is important because it casts doubt on recent results from underground experiments that have reported detecting dark matter.*

PROVIDENCE, R.I. [Brown University] — If dark matter exists in the universe, scientists now have set the strongest limit to date on its mass.

In a paper to be published on Dec. 1 in Physical Review Letters (available in pdf), Brown University assistant professor Savvas Koushiappas and graduate student Alex Geringer-Sameth report that dark matter must have a mass greater than 40 giga-electron volts in dark-matter collisions involving heavy quarks. (The masses of elementary particles are regularly expressed in term of electron volts.) Using publicly available data collected from an instrument on NASA’s Fermi Gamma-ray Space Telescope and a novel statistical approach, the Brown pair constrained the mass of dark matter particles by calculating the rate at which the particles are thought to cancel each other out in galaxies that orbit the Milky Way galaxy.

“What we find is if a particle’s mass is less than 40 GeV, then it cannot be the dark matter particle,” Koushiappas said.

The observational measurements are important because they cast doubt on recent results from dark matter collaborations that have reported detecting the elusive particle in underground experiments. Those collaborations – DAMA/LIBRA, CoGeNT and CRESST – say they found dark matter with masses ranging from 7 to 12 GeV, less than the limit determined by the Brown physicists. 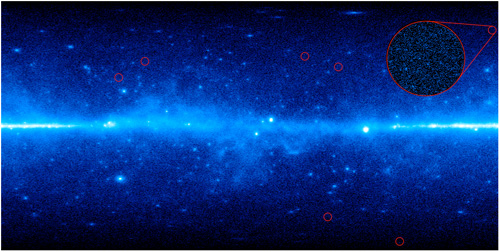 “If for the sake of argument a dark matter particle’s mass is less than 40 GeV, it means the amount of dark matter in the universe today would be so much that the universe would not be expanding at the accelerated rate we observe,” Koushiappas said, referring to the 2011 Nobel prize in physics that was awarded for the discovery that the expansion of the universe is accelerating.

The Fermi-LAT Collaboration, an international scientific collaboration, arrived at similar results, using a different methodology. The Brown and Fermi-LAT collaboration papers will be published in the same issue of Physical Review Letters.

Physicists believe everything that can be seen — planets, stars, galaxies and all else — makes up only 4 percent of the universe. Observations indicate that dark matter accounts for about 23 percent of the universe, while the remaining part is made up of dark energy, the force believed to cause the universe’s accelerated expansion. The problem is dark matter and dark energy do not emit electromagnetic radiation like stars and planets; they can be “seen” only through their gravitational effects. Its shadowy profile and its heavy mass are the main reasons why dark matter is suspected to be a weakly interacting massive particle (WIMP), which makes it very difficult to study.

What physicists do know is that when a WIMP and its anti-particle collide in a process known as annihilation, the debris spewed forth is comprised of heavy quarks and leptons. Physicists also know that when a quark and its anti-quark sibling annihilate, they produce a jet of particles that includes photons, or light.

Koushiappas and Geringer-Sameth in essence reversed the annihilation chain reaction. They set their sights on seven dwarf galaxies which observations show are full of dark matter because their stars’ motion cannot be fully explained by their mass alone. These dwarf galaxies also are largely bereft of hydrogen gas and other common matter, meaning they offer a blank canvas to better observe dark matter and its effects. “There’s a high signal-to-noise ratio. They’re clean systems,” Koushiappas said.

The pair analyzed gamma ray data collected over the last three years by the Fermi telescope to measure the number of photons in the dwarf galaxies. From the number of photons, the Brown researchers were able to determine the rate of quark production, which, in turn, allowed them to establish constraints on the mass of dark matter particles and the rate at which they annihilate.

“This is the first time that we can exclude generic WIMP particles that could account for the abundance of dark matter in the universe,” Koushiappas said.

Geringer-Sameth developed the statistical framework to analyze the data and then applied it to observations of the dwarf galaxies. “This is a very exciting time in the dark matter search, because many experimental tools are finally catching up to long-standing theories about what dark matter actually is,” said Geringer-Sameth, from Croton-on-Hudson, N.Y. “We are starting to really put these theories to the test.”