Using both a simulation and artificial structures called metamaterials, scientists at the University of Chicago, New York University and Leiden University found material failure can be continuously tuned through changes in its underlying rigidity. The research, published in Proceedings of the National Academy of Sciences, were the result of experiments and computer simulations in which researchers examined the effects of varying the rigidity of a material. 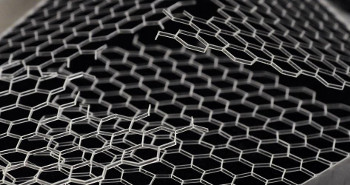 “This research suggests that there is a new axis that can be explored and possibly exploited in determining how materials fail,” said Sidney R. Nagel, the Stein-Freiler Distinguished Service Professor in Physics and a co-author of the paper. “It is only speculation at this point, but this work could allow for better ways of creating materials to withstand certain types of impact without catastrophic failure.”

As a solid approaches a certain level of rigidity, its failure behavior changes dramatically, and the nature of the break is profoundly different at high and low rigidities, the research concluded. Studying and controlling this in a systematic way will give scientists a better understanding of how materials break.

When a system is rigid, such as window glass, its bonds are tightly packed and break in clean, narrow and relatively straight cracks. When a system is floppy with low rigidity, however, it has fewer bonds, and those bonds first tear at seemingly random places throughout the material. Eventually there are so many broken bonds that the tears connect in an irregular pattern and cause the material to break.

Researchers also found that as a material is made more flexible, its failure zone becomes wider, providing scientists a better view of what’s happening. Instead of studying materials at a microscopic scale, researchers can make them less rigid, in essence blowing up the cracking region.

“Reducing the rigidity of a material is, in a sense, like holding a magnifying glass that allows you to zoom in on the width of a crack, which is generally microscopic but can become as big as the sample size,” said co-author Vincenzo Vitelli, a physicist at the Lorentz Institute at Leiden University in the Netherlands.

Scientists familiar with the research said the paper provides a broader understanding of why materials fracture and opens up new areas of study, including how cracking and failure can be controlled.

The researchers “link discoveries about different types of cracks—narrow, clean cracks versus widely spread cracks—into a unified picture that explains them as different limits: rigid materials, on one hand, versus low-rigidity materials on the other,” said Karin Dahmen, a professor of physics at the University of Illinois at Urbana-Champaign, who did not participate in the research. “This study will trigger many follow-up studies because it gives us control, as well as a powerful unified understanding of the spatial extent of cracks in many different materials.”

James Sethna, a professor of physics at Cornell University, agreed. “A systematic theory, hinted at here, could allow us to predict the damage around a crack, the stresses, the meandering and, most important, how all of these factors might vary as one changes how we make the material,” said Sethna, who also didn’t participate in the research. “Trial and error could be replaced by a beautiful, systematic approach.”