ANN ARBOR, Mich.—They shook light from darkness. They coaxed something out of what we normally think of as nothing—the vacuum of space. And now their work has been named one of the top 10 breakthroughs of the year by Physics World, the international magazine announced today.

University of Michigan physics researcher Franco Nori is involved in the work, which was published in Nature in November.

The physicists directly observed, for the first time, light particles that flicker in and out of existence in the vacuum. They witnessed the long-predicted quantum mechanical phenomenon known as the dynamical Casimir effect. 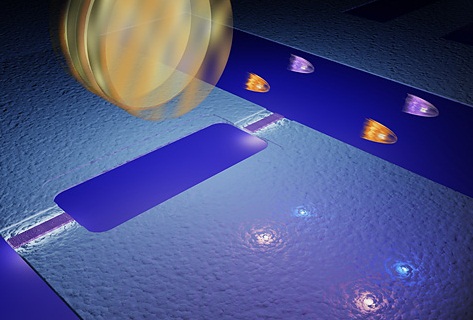 A team of physicists including a researcher from the University of Michigan observed what's called the dynamical Casimir effect for the first time earlier this year. They essentially squeezed light particles from the vacuum of space. Image credit: Philip Krantz.

“One of the profound consequences of quantum mechanics is that we know that something can come from nothing,” Nori said. “The vacuum is actually teeming with activity, the question is how to harness it and observe it because the particles move in an out of existence in the blink of an eye.”

This background activity of fleeting particles is known as quantum vacuum fluctuations. It’s the impetus for what’s known as the static Casimir effect, an attractive force that can pull two parallel mirrors together in a vacuum. That effect is caused by a pressure drop between the mirrors because more photons can exist on the outsides of them. It was measured in the late ’90s.

Scientists theorized that a similar force could be created by accelerating one mirror to near light speed. This “dynamical Casimir effect” was thought to be capable of producing real, observable photons, or light particles, from these quantum vacuum fluctuations. That’s just what these physicists observed.

Based at the Chalmers University of Technology in Sweden, they achieve this by building a special type of superconducting circuit that could simulate a mirrored surface without a physical device that would be difficult to speed up to such high speeds.

Read the original article in Physics World at https://physicsworld.com/cws/article/news/47856.

Their paper is titled “Observation of the dynamical Casimir effect in a superconducting circuit.” The first author is Christopher Wilson, a scientist at Chalmers. It was published in the Nov. 17, 2011 edition of Nature.