Tissue engineers can use mesenchymal stem cells derived from fat to make cartilage, bone, or more fat. The best cells to use are ones that are already likely to become the desired tissue. Brown University researchers have discovered that the mechanical properties of the stem cells can foretell what they will become, leading to a potential method of concentrating them for use in healing.

PROVIDENCE, R.I. [Brown University] — To become better healers, tissue engineers need a timely and reliable way to obtain enough raw materials: cells that either already are or can become the tissue they need to build. In a new study, Brown University biomedical engineers show that the stiffness, viscosity, and other mechanical properties of adult stem cells derived from fat, such as liposuction waste, can predict whether they will turn into bone, cartilage, or fat.

That insight could lead to a filter capable of extracting the needed cells from a larger and more diverse tissue sample, said Eric Darling, senior author of the paper published in Proceedings of the National Academy of Sciences. Imagine a surgeon using such a filter to first extract fat from a patient with a bone injury and then to inject a high concentration of bone-making stem cells into the wound site during the same operation.

In the paper, the researchers report that the stiffest adipose-derived mesenchymal stem cells tended to become bone, the ones that were biggest and softest tended to become fat, and those that were particularly viscous were most likely to end up as cartilage.

“The results are exciting because not only do the mechanical properties indicate what lineage these cells could potentially go along but also the extent of their differentiation,” said Darling, assistant professor of medical science in the Department of Molecular Pharmacology, Physiology. and Biotechnology and the University’s Center for Biomedical Engineering. “It tells us how good they are going to be if we differentiated them for a given tissue type.” 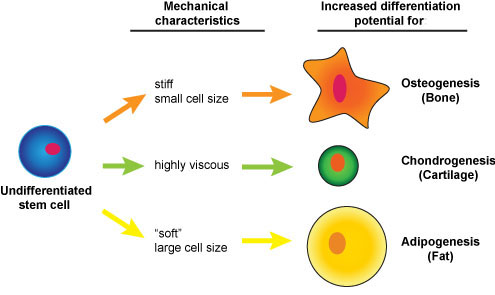 So when tissue engineers go looking through extracted fat for cells to create bone, for instance, they can sort through the cells looking for ones with a certain level of stiffness or greater. Whether the cells are “undifferentiated” stem cells that have made no move toward becoming a specific cell type, or ones that are already bone cells, only the ones with the requisite stiffness would make the cut. That process would yield a higher population of cells for making new bone tissue.

“Can we enrich the cell populations for cells that we want to use, whether they are totally undifferentiated cell types, partially differentiated, or completely differentiated?” Darling said. “It doesn’t matter as long as it’s targeted for the specific tissue application.” 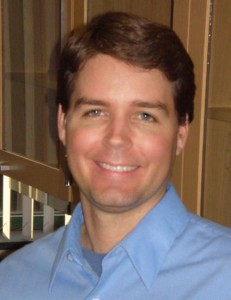 Eric Darling. If mechanical properties of stem cells — viscosity, stiffness, size — predict what they will become, the next step is to develop a high-throughput testing and sorting device. Image credit: Brown University

Darling’s study, led by research assistants Rafael Gonzaelz-Cruz and Vera Fonseca, involved cloning adipose-derived adult human stem cells into 32 stem cell populations. They then poked, prodded, and measured the cells with an atomic force microscope, gaining measurements of how big they were, how sturdy they were under pressure, and how the force between them and the scope’s cantilevered probe changed over time. The team found the cells exhibited a wide range of stiffness, viscosity and size.

Once they had the measurements, the researchers chemically induced the cells to differentiate and analyzed the levels of key metabolites produced by the cells as they matured a few weeks later. For each population, the metabolites indicated the relative proportion that differentiated into one tissue or another. Population 28, for example, apparently responded productively to chemical cues for producing cartilage, only somewhat well for producing bone and poorly to cues for making fat.

The key moment was when the researchers correlated each cell population’s mechanical measurements with its metabolite data. Did the mechanical properties predict which populations would be the most successful in turning into bone cells or cartilage cells or fat cells? Sure enough, they did. The stiffest cell populations produced more bone. The squishiest cells were the ones that produced the most fat. The ones with the highest viscosity were the ones seemingly headed toward becoming cartilage.

Darling and his team then conducted a sorting simulation to determine whether filtering a sample by different mechanical characteristics could result in extracting a higher concentration of useful cells from tissue. They found that while yields using current methods of looking for molecular biomarkers are less than 1 percent, yields based on mechanical properties could increase to 3 percent for bone-making cells, 6 percent for cartilage, and 9 percent for fat.

Encouraged by the results, which he acknowledges are basic, Darling’s group is already working toward a more practical realization of the discovery. After all, surgeons aren’t going to bring atomic force microscopes into the operating room; those devices work too slowly to identify enough cells in a reasonable time.

“To actually apply this, we need some sort of high-throughput mechanical testing device,” he said. “That is where the next stage is. That’s something that my lab is working on right now.”

So the idea is taking shape, like a stem cell striving to become fat, bone, or cartilage.