Oil and gas development continues to press into the most remote corners of the western Amazon, one of the most biologically and culturally diverse zones on Earth. Now a study proposes a new 10-point, best-practice framework that combines technical engineering criteria with consideration of ecological and social concerns to reduce the negative impacts of Amazonian hydrocarbon exploration and production.

The researchers say, for example, that by using extended reach drilling (ERD), a technique to reach a larger subsurface area from one surface drilling location, it is possible to greatly reduce the total number of needed drilling platforms and access roads for a given project.

Using ERD along with other key components of technical best practice, such as reduced pipeline right-of-way and a prohibition on new access roads, could reduce project-related deforestation by more than 75 percent, says Dr. Clinton Jenkins, a North Carolina State University biologist and co-author of the study, published online Wednesday, May 1, in PLOS ONE.

The study’s analysis focused on the department of Loreto, a vast Amazonian region in northern Peru that is home to extraordinary biological and cultural diversity. Loreto recently made headlines when the Peruvian government declared an environmental state of emergency following years of extensive oil contamination in part of the area.

“Loreto makes an ideal case study because it is one of the largest and most dynamic hydrocarbon zones in the Amazon. Following the state of emergency, there is an added urgency to develop methods to minimize the impacts of any future development,” said study lead author Dr. Matt Finer of the Center for International Environmental Law. “We developed such a method that identifies specific areas where the use of best practice would drastically reduce impacts.” 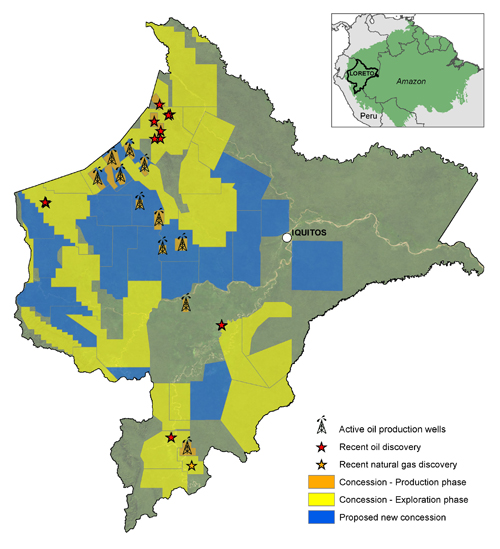 A study presents a new framework for oil and gas development in the Amazon. Image credit: North Carolina State University

The study combines the analysis of new detailed maps of existing and planned oil and gas infrastructure with a detailed set of best practice guidelines designed to minimize impacts in a tropical forest environment.

“We found that, in addition to the older oil operations that have caused significant contamination, there are a series of major new oil and gas discoveries around the region,” Jenkins added. “These discoveries, in addition to the continually expanding plans for more exploration, highlight the urgent need to implement mandatory best practice guidelines to avoid repeating the problems of the past.”

The researchers assert that following best practices should not increase project costs and may actually be cheaper in the long run.

“The engineering section of the guidelines addresses the full range of key project components,” said co-author Bill Powers of E-Tech International. “In addition to greatly reducing negative impacts such as deforestation, we found that best practice does not impose substantially greater costs than a conventional project, and may in fact reduce overall costs.”

The open-access study can be found here.

The research was funded by the Gordon and Betty Moore Foundation, National Geographic Society, and the Blue Moon Fund.