New analysis, using data from NASA’s GRAIL spacecraft, has determined that the large dark patch on the western edge of the Moon’s near side is not an impact crater after all.

PROVIDENCE, R.I. [Brown University] — Oceanus Procellarum, a vast dark patch visible on the western edge of the Moon’s near side, has long been a source of mystery for planetary scientists. Some have suggested that the “ocean of storms” is part of a giant basin formed by an asteroid impact early in the Moon’s history. But new research published today in Nature deals a pretty big blow to the impact theory.

The new study, based on data from NASA’s GRAIL mission, found a series of linear gravitational anomalies forming a giant rectangle, nearly 1,600 miles across, running beneath the Procellarum region. Those anomalies appear to be the remnants of ancient rifts in the Moon’s crust, say the authors of the new study. The rifts provided a vast “magma plumbing system” that flooded the region with volcanic lava between 3 and 4 billion years ago. That giant flux of lava solidified to form the dark basalts we see from Earth.

It’s the shape of the underlying gravity anomalies that cast doubt on impact hypothesis, said Jim Head, the Louis and Elizabeth Scherck Distinguished Professor of Geological Sciences at Brown and one of the authors of the new paper.

“Instead of a central circular gravity anomaly like all other impact basins, at Procellarum we see these linear features forming this huge rectangle,” Head said. “This shape argues strongly for an internal origin and suggests internal forces.” 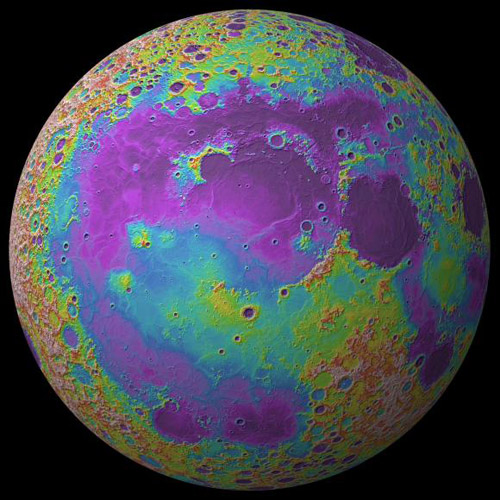 Ocean of storms. A topographic map of the Moon (low elevations in purple, high in red) shows extensive lava flows in Oceanus Procellarum. New data from the GRAIL spacecraft suggests the region was formed by ancient volcanic activity, not by a large impactor as had long been suspected. The image was rendered with data from NASA’s Lunar Reconnaissance Orbiter and Lunar Orbiting Laster Altimeter. Image credit: Jay Dickson/Brown University

The research team, led by Jeffrey Andrews-Hanna of the Colorado School of Mines, suggests a new hypothesis for just what those internal forces may have been. The process, the researchers believe, was driven by the geochemical composition of the Moon’s crust in the Procellarum region.

Early in its history, the Moon is believed to have been entirely covered in molten magma, which slowly cooled to form the crust. However, the Procellarum region is known to have a high concentration of uranium, thorium, and potassium — radioactive elements that produce heat. The researchers believe those elements may have caused Procellarum to cool and solidify after the rest of the crust had already cooled. When Procellarum did finally cool, it shrank and pulled away from the surrounding crust, forming the giant rifts seen in the new data. Magma flowed into those rifts and flooded the region.

“We think this is a really good, testable alternative to the impact basin theory,” said Head. “Everything we see suggests that internal forces were critical in the formation of Procellarum.” 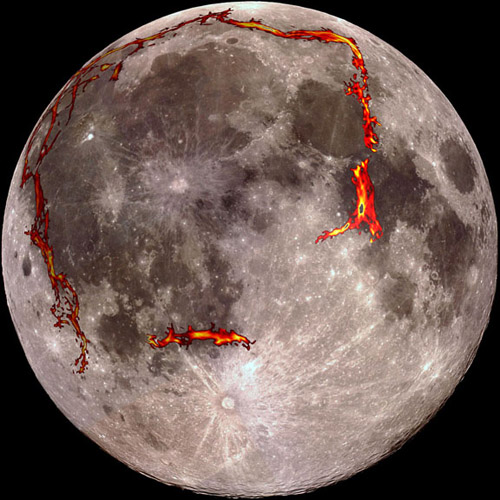 The full Moon as seen from the Earth, with the Procellarum border structures — the gravitational anomalies — superimposed in red. Image credit: Kopernik Observatory/NASA/Colorado School of Mines/MIT/JPL/Goddard Space Flight Center

The familiar face of the Moon’s near side is dominated by the lunar maria, the dark patches etched across the surface. Most of the large circular features — like Mare Serenitatis (Sea of Serenity) and Mare Imbrium (Sea of Rains) — have been shown to be impact basins that later filled with volcanic lava, which eventually cooled to form the dark basalts. Samples gathered during the Apollo missions, and data gathered by subsequent unmanned missions, helped to confirm that idea.

But the origin of Oceanus Procellarum remained up in the air, largely because it simply doesn’t look like the known basins. It is shaped a bit like a horseshoe, while the other basins are round. Procellarum also lacks surrounding mountains and radial grooves scoured by impact ejecta, both telltale signs of an impact basin.

Still, the idea that Procellarum was indeed formed by an impact surfaced in the mid-1970s. Proponents of the impact theory argued that Procellarum looked different simply because it was much older than the other basins. Because of its age, the telltale mountains and grooves had been eroded away, and debris had partially filled the basin’s midsection, giving it the horseshoe shape.

Finally settling the debate required a mission like GRAIL, Head said. The mission is led by Maria Zuber, who earned her Ph.D. at Brown and is now vice president of research at MIT. The twin GRAIL spacecraft, which orbited the Moon in 2012, made detailed maps of the Moon’s gravity. Those maps have revealed important details about the Moon’s subsurface crust.

“It’s like putting the crust under an X-ray,” Head said. “We can go into the subsurface and see what’s there. And when you’re looking at what could be very old features, that’s what you have to do because signatures at the surface become degraded over time.”

Apollo 15 Commander David R. Scott, a visiting professor in the Department of Earth, Environmental, and Planetary Sciences at Brown, explored the Hadley-Apennine region at the edge of the Imbrium basin in 1971. “Orbiting the Moon following our surface exploration, it was very clear that Oceanus Procellarum differed in many ways from the circular maria in terms of its volcanic and tectonic activity,” he said. “After so many years of puzzling over this, GRAIL has now provided the data to show why it is so distinctly different.”

Head said the results from this study show the remarkable extent to which internal processes can alter the surface of a planetary body. The data generated here will be helpful in understanding the evolution of other planets and moons, and aid in the continuing exploration of our own Moon.