*Undergraduate researcher Safatul Islam is a member of a team in the College of Optical Sciences investigating organic photovoltaics, which can lead to improved electronics.*

As the summer dwindles down, many people eagerly welcome the decline of long sunny days. But for others, this period of shorter days signals the end of the sun’s longest duration of generously giving energy to this region of the world.

Safatul Islam, a University of Arizona sophomore studying chemical engineering and mathematics, is working with researchers to develop better ways to harness the sun’s power for human use.

This summer, Islam has been working under UA College of Optical Sciences professor Robert Norwood and his solar team. 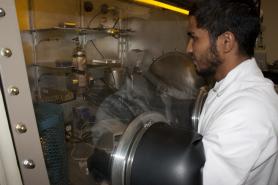 The team is investigating different ways to improve a special category of solar cells – organic photovoltaics, or OPVs.

Unlike typical solar cells composed of semiconductors like silicon, these cells utilize carbon-based polymers that are able to separate charges to produce a current directly from the sun’s energy.

Still a relatively new field of study, OPVs show promise because of their immense variability and the fact that they are less costly and more resourceful, said Islam, a UA Honors College student.

“OPVs may never reach the conversion efficiency of their crystalline counterparts,” said Islam, as part of the research team, who works closely with Byron Cocilovo, a doctoral student of optical sciences.

“But the best thing is that they don’t need to,” Islam said. “Since they are so much cheaper to make and the sun provides so much energy, a target of 10 percent efficiency will hopefully make them viable in the market.”

Translation: Out of the light that hits the cell, only 10 percent needs to be converted to usable electricity. However, there is still work that needs to be done to get to that point.

His research project has been aimed at building cells in a nitrogen-rich environment, then exposing them to the atmosphere and investigating the degradation of the cells.

In an ambient air environment, the electrodes of the cell oxidize and the polymer layers degrade, so the cells don’t last longer than a few days, Islam said. “But we’re exploring ways to impede the degradation, either by changing the structure or experimenting with the chemical encapsulation layers.”

After spending the summer fabricating cells and working to improve the methods of testing them, Islam said he and other members of his team are optimistic that organic PV cells will reach a point when they will be commercially viable.

“There are lots of things to play with,” he said. “Whether it’s modifying the structure to allow the organic solar cell to trap more light or degrade slower, or understanding the chemical makeup to use more effective polymer combinations, the possible ways to improve the cell are endless.”

– Written by Safatul Islam, who is involved in the UA’s Undergraduate Biology Research Program. Islam’s research was funded by the U.S. Department of Energy’s Energy Frontier Research Center for Interface Science and Solar Electric Materials and a grant to the UA from the Howard Hughes Medical Institute.