At the heart of computing are tiny crystals that transmit and store digital information’s ones and zeroes. Today these are hard and brittle materials. But cheap, flexible, nontoxic organic molecules may play a role in the future of hardware.

A team led by the University of Washington in Seattle and the Southeast University in China discovered a molecule that shows promise as an organic alternative to today’s silicon-based semiconductors. The findings, published this week in the journal Science, display properties that make it well suited to a wide range of applications in memory, sensing and low-cost energy storage.

“This molecule is quite remarkable, with some of the key properties that are comparable with the most popular inorganic crystals,” said co-corresponding author Jiangyu Li, a UW associate professor of mechanical engineering.

The carbon-based material could offer even cheaper ways to store digital information; provide a flexible, nontoxic material for medical sensors that would be implanted in the body; and create a less costly, lighter material to harvest energy from natural vibrations. 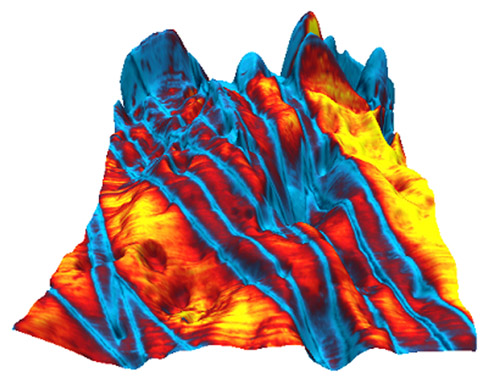 In the study the authors pitted their molecule against barium titanate, a long-known ferroelectric material that is a standard for performance. Barium titanate is a ceramic crystal and contains titanium; it has largely been replaced in industrial applications by better-performing but lead-containing alternatives.

The new molecule holds its own against the standard-bearer. It has a natural polarization, a measure of how strongly the molecules align to store information, of 23, compared to 26 for barium titanate. To Li’s knowledge this is the best organic ferroelectric discovered to date.

A recent study in Nature announced an organic ferroelectric that works at room temperature. By contrast, this molecule retains its properties up to 153 degrees Celsius (307 degrees F), even higher than for barium titanate.

The new molecule also offers a full bag of electric tricks. Its dielectric constant – a measure of how well it can store energy – is more than 10 times higher than for other organic ferroelectrics. And it’s also a good piezoelectric, meaning it’s efficient at converting movement into electricity, which is useful in sensors.

The organic crystal is made from bromine, a natural element isolated from sea salt, mixed with carbon, hydrogen and nitrogen (its full name is diisopropylammonium bromide). Researchers dissolved the elements in water and evaporated the liquid to grow the crystal. Because the molecule contains carbon, it is organic, and pivoting chemical bonds allow it to flex.

The molecule would not replace current inorganic materials, Li said, but it could be used in applications where cost, ease of manufacturing, weight, flexibility and toxicity are important.

Li is working on a number of projects relating to ferroelectricity. Last year he and his graduate student found the first evidence for ferroelectricity in soft animal tissue. He was co-author on a 2011 paper in Science that documents nanometer-scale switching in ferroelectric films, showing how such molecules could be used to store digital information.

“Ferroelectrics are pretty remarkable materials,” Li said. “It allows you to manipulate mechanical energy, electrical energy, optics and electromagnetics, all in a single package.”

He is working to further characterize this new molecule and explore its combined electric and mechanical properties. He also plans to continue the search for more organic ferroelectrics.

The joint first authors of the new paper are Yuanming Liu, a UW postdoctoral researcher in mechanical engineering, and Da-Wei Fu, a doctoral student working with co-corresponding author Ren-Gen Xiong at Southeast University. Other co-authors are Hong-Ling Cai, Qiong Ye, Wen Zhang and Yi Zhang at Southeast University; Xue-Yuan Chen at the Chinese Academy of Sciences; and Gianluca Giovannetti and Massimo Capone at the Italian National Simulation Centre.