One Tree’s Architecture Reveals Secrets of a Forest, Study Finds

Behind the dazzling variety of shapes and forms found in trees hides a remarkably similar architecture based on fundamental, shared principles, UA ecologists have discovered.

Researchers in the University of Arizona’s department of ecology and evolutionary biology have found that despite differences in appearance, trees across species share remarkably similar architecture and can tell scientists a lot about an entire forest.

Just by looking at a tree’s branching pattern, it turns out, scientists can gather clues about how it functions – for example how much carbon dioxide it exchanges with the atmosphere or how much water transpires through its leaves – regardless of the tree’s shape or species.

The researchers’ results, published in the August issue of the scientific journal Ecology Letters, have important implications for models used by scientists to assess how trees influence ecosystems across the globe. 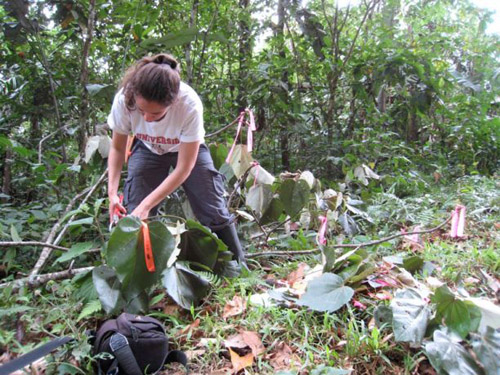 Cathy Hulshoff, a graduate student in Brian Enquist’s group, takes measurements on a tree in the rainforest. (Photo courtesy of Lisa Patrick Bentley)

Studies like this enable scientists to refine models used to assess and predict functions that cannot be directly measured for an entire forest, for example how much carbon dioxide and oxygen the forest exchanges with the atmosphere and how much water the trees lose through evaporation.

According to the authors, their study is the first empirical test of a theory UA ecology professor Brian Enquist helped develop in 1998. That theory holds that a tree’s branching structure – specifically, the width and length of its branches – predicts how much carbon and water a tree exchanges with the environment in relation to its overall size, independently of the species.

“This theory can be used to scale the size of plants to their function, such as amount of photosynthesis, water loss and respiration, especially in light of climate change,” said Lisa Patrick Bentley, who led the research, funded by the National Science Foundation, as part of a postdoctoral fellowship in Enquist’s lab. “If you were to look at an entire forest and wanted to know how much carbon this forest puts out, our study supports the idea that you might only have to look at the properties of a few trees, representing the smallest and the largest, to figure this out.” 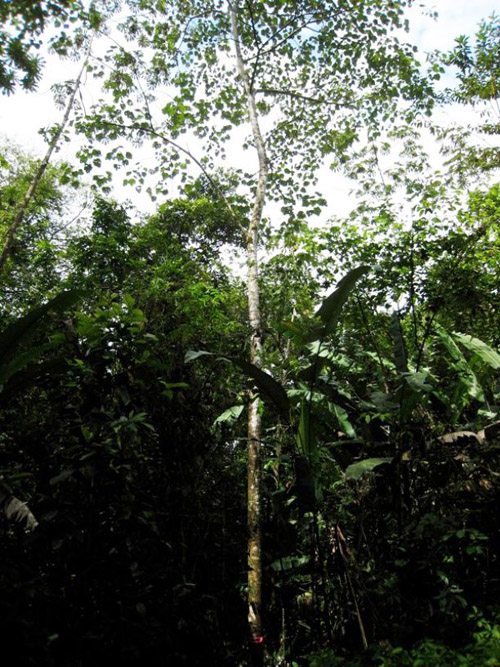 This balsa tree looks very different from say, a pine tree. Yet, UA ecologists discovered that both share a general architecture that can help scientists make predictions about entire forests. (Photo courtesy of Lisa Patrick Bentley)

“All of the tree species we studied have very similar branching patterns regardless of their difference in appearance,” she said. “For example, even though a piñon pine tree looks very different from a maple tree, there are similar general ecological, biological and physical principles that have resulted in a similar branching architecture across those species over the course of evolution.”

Bentley and her team tested this prediction in five different species of trees: maple, oak, balsa, Ponderosa pine and piñon pine. They found the theory to be correct in that it allows for predictions about a tree’s function depending on its size, and also in that the theory’s principles apply across species, despite their differences in appearance.

“There is a relationship between the size and shape of branches,” Bentley said. “They grow within proportion. Take a pine tree, for example: It has the general shape of a cone, while an oak tree looks like more like an inverted cone. When you think about the many different shapes of trees, I think it’s pretty amazing that you get this correlation between such different looking trees.” 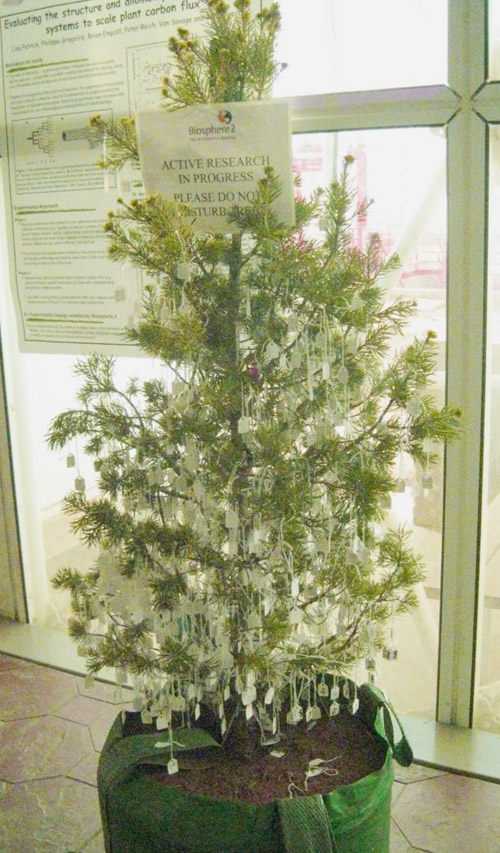 What looks like a christmas tree is actually a study subject: Bentley’s team, including several UA undergraduate students, carefully attached labels to every single branch of several trees to keep track of them. (Photo courtesy of Lisa Patrick Bentley)

For their study, the researchers harvested a total of nine specimens from forest areas set aside for research purposes. A team of undergraduate and graduate student researchers dissected the trees down to the last twig, counting the number of branches, the number of branching points, or nodes, and measuring the length and diameter of each branch.

“If you imagine collapsing all of a tree’s outermost branches into one cylinder, that cylinder would be the size of the trunk,” Bentley said. “According to Leonardo’s rule, the total area of branches is conserved as you go from the trunk all the way to the branches at the top.”

At the same time, the experiments revealed that actual tree branching patterns are more varied and complex than predicted by the theory. 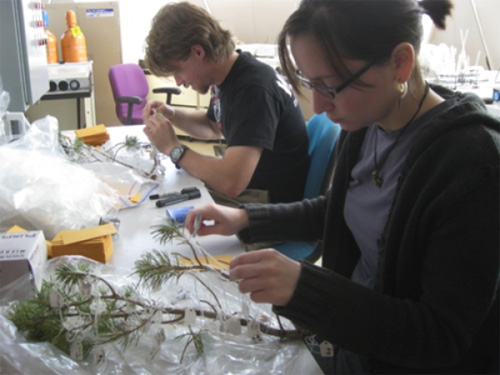 “The theory assumes branching patterns based on fractals, which is the same perfectly symmetrical ‘Y’ branching pattern repeating over and over, but trees don’t look like that,” said Bentley, who currently is working in Peru as part of her research through a postdoctoral fellowship the University of Oxford. “If you look at two trees that are the same height and belong to the same species, you’ll see more variability: one branch might branch two times, but its sister branch might branch three or four times.”

“After testing the theory empirically, we conclude that generally speaking, the theory works well, but in some aspects it needs to be modified to incorporate more variation among species,” said Bentley. “Based on our results, we think the theory should be modified to include asymmetrical branching.”