On the Road to Fault-Tolerant Quantum Computing

Reliable quantum computing would make it possible to solve certain types of extremely complex technological problems millions of times faster than today’s most powerful supercomputers. Other types of problems that quantum computing could tackle would not even be feasible with today’s fastest machines. The key word is “reliable.” If the enormous potential of quantum computing is to be fully realized, scientists must learn to create “fault-tolerant” quantum computers. A small but important step toward this goal has been achieved by an international collaboration of researchers from China’s  Tsinghua University and the U.S. Department of Energy (DOE)’s Lawrence Berkeley National Laboratory (Berkeley Lab) working at the Advanced Light Source (ALS).

Using premier beams of ultraviolet light at the ALS, a DOE national user facility for synchrotron radiation, the collaboration has reported the first demonstration of high-temperature superconductivity in the surface of a topological insulator – a unique class of advanced materials that are electrically insulating on the inside but conducting on the surface. Inducing high-temperature superconductivity on the surface of a topological insulator opens the door to the creation of a pre-requisite for fault-tolerant quantum computing, a mysterious quasiparticle known as the “Majorana zero mode.”

The results of this research are presented in the journal Nature Physics in a paper titled “Fully gapped topological surface states in Bi2Se3 induced by a d-wave high temperature superconductor.” The corresponding authors are Shuyun Zhou and Xi Chen of Tsinghua University in Beijing, China. The lead authors are Eryin Wang and Hao Ding, also with Tsinghua University. Wang is currently an ALS Doctoral fellow in residence.

For all of its boundless potential, quantum computing faces a serious flaw. The quantum data bit or “qubit” used to process and store information is fragile and easily perturbed by electrons and other elements in its surrounding environment. Utilizing topological insulators is considered one promising approach for solving this “decoherence” problem because qubits in a topological quantum computer would be made from Majorana zero modes, which are naturally immune from decoherence. Information processed and stored in such topological qubits would always be preserved. While the ALS collaboration has not yet identified a Majorana zero mode in their bismuth selenide/BSCCO heterostructures, they believe their material is fertile ground for doing so.

“Our studies reveal a large superconducting pairing gap on the topological surface states of thin films of the bismuth selenide topological insulator when grown on BSCCO,” Fedorov says. “This suggests that Majorana zero modes are likely to exist, bound to magnetic vortices in this material, but we will have to do other types of measurements to find it.”

“Our study was made possible by the high quality topological insulator film heterostructure that the Chen and Xue groups  managed to grow,” says Zhou, who did much of her research at the ALS before returning to China. “Bismuth selenide and the BSSCO ceramic have very different crystal structures and symmetries, which made the growth of such a heterostructure particularly challenging.” 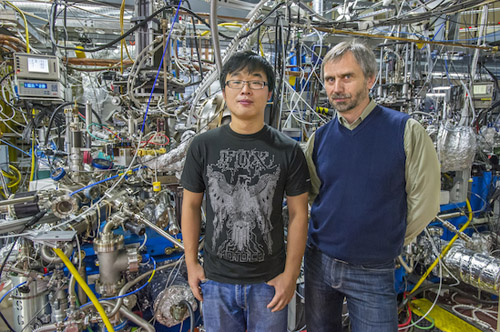 Says Chen, “By controlling the growth kinetics carefully using molecular beam epitaxy, we managed to grow a topological insulator film with controlled thickness on a freshly cleaved BSCCO surface. This provided a cleaner and better-controlled interface, and also opened up opportunities for surface sensitive measurements.”

The bismuth selenide/BSCCO material was brought to the ALS to study the electronic states on its surface using a technique known as ARPES, for angle-resolved photoemission spectroscopy. In ARPES, a beam of X-ray photons striking the material’s surface causes the photoemission of electrons. The kinetic energy of these photoelectrons and the angles at which they are ejected are then measured to obtain an electronic spectrum.

“Previous work on topological insulators revealed superconductivity at only a few Kelvin with a gap of about one milli-electron volt,” Fedorov says. “Such a small energy scale and ultra-low temperature makes it particularly challenging to realize Majorana zero modes experimentally, and to distinguish these modes from other states. Using ARPES, we show evidence of a superconducting gap persisting in the surfaces of our material up to the transition temperature of BSCCO. As the gap and transition temperature in our heterostructure reflect almost an order of magnitude increase over previous work, we believe ours is a better system to search for Majorana zero modes.”

This research was primarily supported by the National Natural Science Foundation of China.