Of Aging Bones and Sunshine

Everyone knows that as we grow older our bones become more fragile. Now a team of U.S. and German scientists led by researchers with the U.S. Department of Energy (DOE)’s Lawrence Berkeley National Laboratory (Berkeley Lab) and the University of California (UC) Berkeley has shown that this bone-aging process can be significantly accelerated through deficiency of vitamin D – the sunshine vitamin.

Vitamin D deficiency is a widespread medical condition that has been linked to the health and fracture risk of human bone on the basis of low calcium intake and reduced bone density. However, working at Berkeley Lab’s Advanced Light ALS), a DOE national user facility, the international team demonstrated that vitamin D deficiency also reduces bone quality.

“The assumption has been that the main problem with vitamin D deficiency is reduced mineralization for the creation of new bone mass, but we’ve shown that low levels of vitamin D also induces premature aging of existing bone,” says Robert Ritchie, who led the U.S. portion of this collaboration. Ritchie holds joint appointments with Berkeley Lab’s Materials Sciences Division and the University of California (UC) Berkeley’s Materials Science and Engineering Department.

“Unraveling the complexity of human bone structure may provide some insight into more effective ways to prevent or treat fractures in patients with vitamin D deficiency,” says Björn Busse, of the Department of Osteology and Biomechanics at the University Medical Center in Hamburg, Germany, who led the German portion of the team. 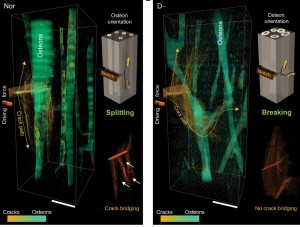 These 3D reconstructions of crack paths show in the normal bone (left) pronounced crack deflection by splitting along the interfaces of the osteons accompanied by the formation of crack bridges. In vitamin D–deficient sample, the crack takes a tortuous breaking path across the osteons with no crack bridging. Image courtesy of Ritchie and Bale (Click image to enlarge)

Vitamin-D is essential for the body to absorb calcium. The body normally synthesizes vitamin D in the skin following exposure to sunlight – hence the “sunshine” moniker. However, when vitamin D serum concentrations become deficient, the body will remove calcium from bone to maintain normal calcium blood levels. This removal of calcium from existing bone hampers the mineralization process required for the formation of new bone mass. In children, vitamin D deficiency can lead to rickets. In adults, vitamin D deficiency causes osteomalacia, a softening of the bones associated with defective mineralization that results in bone pain, muscle weakness, and increased risk of bone deformation and fracture. While treatments with vitamin D and calcium supplements are effective, success has been achieved with only modest increases in bone mineral density, suggesting other factors also play a role in reducing fracture risks.

“We hypothesized that restoring the normal level of vitamin D not only corrects the imbalance of mineralized and non-mineralized bone quantities, but also initiates simultaneous multiscale alterations in bone structure that affects both the intrinsic and extrinsic fracture mechanisms,” Ritchie says. 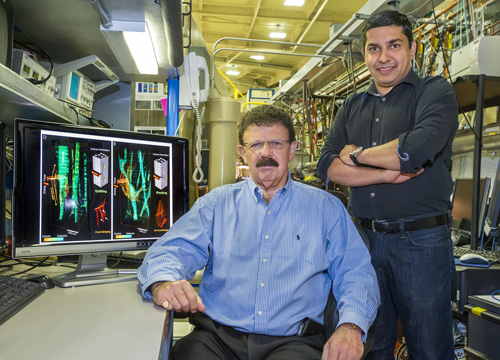 Robert Ritchie (left) and Hrishikesh Bale used a combination of FTIR spectroscopy and X-ray CT at the Advanced Light Source to find that vitamin D deficiency speeds the aging process of bone and reduces its quality. (Photo by Roy Kaltschmidt)

The bone samples were sent to Ritchie and his team for analysis at the ALS using Fourier Transform Infrared (FTIR) spectroscopy and X-ray computed microtomography. The FTIR spectroscopy capabilities of ALS beamlines 1.4.3 and 5.4.1 provide molecular-level chemical information, and ALS Beamline 8.3.2 provides non-destructive 3D imaging at a resolution of approximately one micron.

“We were interested in spatially resolved data that would help us to follow the formation of cracks under mechanical loading,” Ritchie says. “The ALS beamlines enabled us to measure the structure/composition and mechanical properties of the bone samples at different size-scales, ranging from nanometers to micrometers. We measured the resistance to crack growth and by following crack growth in real-time were able to observe how cracks and structure interact. This enabled us to relate mechanical properties to specific structural changes.”

Ritchie and his team found that while vitamin D-deficient subjects had less overall mineralization due to a reduction of mineralized bone, underneath the new non-mineralized surfaces, the existing bone was actually more heavily mineralized, and displayed the structural characteristics – mature collagen molecules and mineral crystals – of older and more brittle bone.

“These islands of mineralized bone were surrounded by a collagenous boundary that prevented them from being properly remodeled,” Busse says. “Cut off from a supply of osteoclasts, the cells that normally remodel the bone, these isolated sections of mineralized bone begin to age, even as overall bone mineralization decreases from a lack of calcium.”

Says Ritchie,“In situ fracture mechanics measurements and CT-scanning of the crack path indicated that vitamin D deficiency increases both the initiation and propagation of cracks by 22- to 31-percent.”

From their study, Busse, Ritchie and their co-authors say that vitamin-D levels should be checked and kept on well-balanced levels to maintain the structural integrity of bones and avoid mineralization defects and aging issues that can lead to a risk of fractures.