Students in U of M assistant professor Chris Larson’s sculpture course, “Site, Environment, Community,” probably weren’t expecting mathematics and power tools to play such an important role in their creation of art.

But then, it’s not every class that gets to design and build two holes of mini golf for a world-renowned museum like The Walker Art Center.

This year marks the 25th anniversary of the Walker’s outdoor sculpture garden, and the 6th year the museum has hosted its summer treat, the 15-hole Artist-Designed Mini Golf course.

You are the art 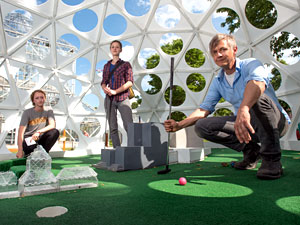 It’s not passive art, to be sure. There are no velvet ropes to stand behind, and if art derives any value from how and perhaps how many people interact with it, then the 50,000 visitors who will tramp through the course this summer are testament to the power, regardless of the medium, of big ideas.

The Walker approached Larson, a renowned artist, and asked him to submit proposals to create one of the holes as a project for his class, then came back and upped the ante to two holes—no small feat, even for mini golf.

“We submitted four proposals, and they selected the two most ambitious projects,” says Larson. They were chosen from more than 60 proposals from teams of Minnesota artists, architects, and designers.

And while mini golf may not be the most serious of games, the combination of art and mini golf proved quite serious. Students worked long hours, fretting away evenings, and, as Larson says, even worked weeks beyond the conclusion of the course to make each hole its best.

One of those students was U of M junior Jordan Rosenow. She says the class started by throwing out ideas.

“We decided that we wanted holes that were challenging, but that were more interesting, holistically, than just playing golf,” says Rosenow. “So we brainstormed words—’geometric’ was one and ‘scale shift’ was another.”

In the end, students decided on one hole called the “Ames Room,” a distorted room that creates an optical illusion, in this case of golfers, so that those nearest appear as giants compared to those in back, despite their separation of just a few meters. Its hole-in-one happens to be incredibly challenging.

The other sculpture, “Mega Golf,” is a walk-in geodesic dome containing a full replica of the Walker’s grounds, complete with a miniature spoon and cherry on top.

“Almost every concept we proposed involved a scale shift in some way,” says Sara Nichol, a classmate who worked with Rosenow and 13 other students on the project. “Mini golf is already a scale shift, so we wanted to take advantage of that.” 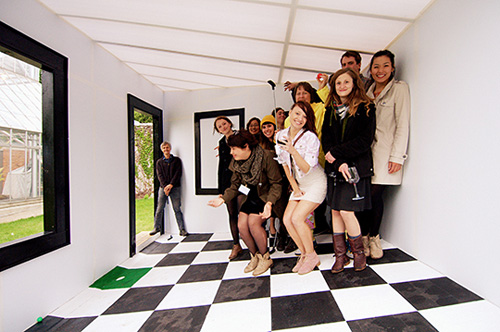 But the course wasn’t without challenges. Some of the students blogged about the project, and one of those posts from Feb. 21 tells it all:

“What at first just seemed fun is turning into a heavy amount of time spent calculating dimensions and measurements. … Basically what we’re doing this week is A LOT OF MATH. Turns out basic math skills are a necessity, even for artists.”

Rosenow says the effort was exciting, but exhausting, too. “We went two or three weeks over, with a couple of overnights, and we had to build it four times,” she says. “So this class kind of showed us that everything in life takes longer than you expect—that it’s a lot more work, but we learned how to get around challenges.”

The students also learned perseverance and collaboration—skills that will carry on beyond art, in everything they do.

“It’s challenging to take 15 students and collectively come to a meeting point,” says Larson. “But I think it happened. And it is invaluable what the students gained from this class—working with a world-renowned museum, with the curators. To be 18 years old and have your work featured here—it’s remarkable. And you could feel as the class went on, everybody bumped up—they felt it—that this is bigger than us.”

And that, certainly, is a truth much more than a trick of the eye.