Nuclear Waste-Burning Technology Could Change the Face of Nuclear Energy

AUSTIN, Texas — University of Texas at Austin physicists have been awarded a U.S. patent for an invention that could someday be used to turn nuclear waste into fuel, thus removing the most dangerous forms of waste from the fuel cycle.

The researchers — Mike Kotschenreuther, Prashant Valanju and Swadesh Mahajan of the College of Natural Sciences — have patented the concept for a novel fusion-fission hybrid nuclear reactor that would use nuclear fusion and fission together to incinerate nuclear waste. Fusion produces energy by fusing atomic nuclei, and fission produces energy by splitting atomic nuclei.

The process of burning the waste would also produce energy. The researchers’ goal is to eliminate 99 percent of the most toxic transuranic waste from nuclear fission reactors.

“The potential for this kind of technology is enormous,” said Mahajan, professor of physics. “Now that we have the patent, we hope this will open up opportunities to engage with the research and development community to further this potentially world-changing technology.” 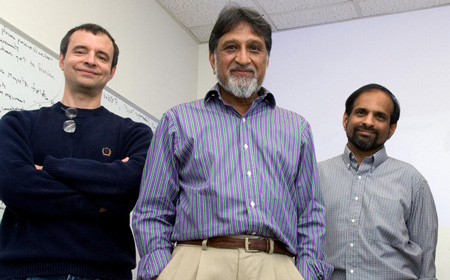 The researchers’ patent covers a tokamak device, which uses magnetic fields to produce fusion reactions. The patented tokamak is surrounded by an area that would house a nuclear waste fuel source and waste by-products of the nuclear fuel cycle. The device is driven by a transformational technology called the Super X Divertor.

The Super X Divertor is a crucial technology that has the capacity to safely divert the enormous amounts of heat out of the reactor core to keep the reactor producing energy.

The physicists’ invention could someday drastically decrease the need for any additional or expanded geological repositories, making nuclear power cleaner and more viable.

The patented hybrid reactor is currently in a conceptual phase.

The Super X Divertor, however, is being installed as the centerpiece of a $40 million upgrade of the MAST tokamak in the United Kingdom. This installation is a critical step forward in testing the Super X Divertor experimentally. It is not covered by the U.S. patent but is the technology invented by the University of Texas at Austin physicists.