A National Science Foundation-funded radio telescope in Antarctica has found an extraordinary galaxy cluster that may force astronomers to rethink how galaxy clusters and the galaxies that inhabit them evolve.

The galaxy cluster was discovered some 5.7 billion light years from Earth by the 10-meter wide South Pole Telescope (SPT) located at NSF’s Amundsen-Scott South Pole Station in Antarctica, which is funded by NSF’s Office of Polar Programs.

NSF manages the U.S. Antarctic Program, through which it coordinates all U.S research and required logistical support on the continent as well as aboard ships in the Southern Ocean. 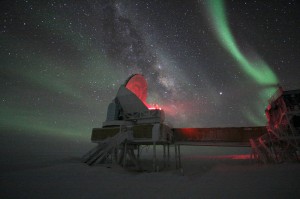 A galaxy cluster was discovered by this 10-meter wide South Pole Telescope, which is located at NSF's Amundsen-Scott South Pole Station in Antarctica and funded by NSF's Office of Polar Programs. NSF manages the U.S. Antarctic Program, through which it coordinates all U.S. research and required logistical support on the continent as well as aboard ships in the Southern Ocean. Image credit: Keith Vanderlinde, National Science Foundation

Officially known as SPT-CLJ2344-4243, the cluster has been dubbed the “Phoenix Cluster” because it is located in the constellation of the Phoenix and because of its remarkable properties. Scientists taking part in the SPT collaboration found the cluster using the Sunyaev-Zel’dovich (SZ) effect, the result of high energy electrons distorting the cosmic microwave background (CMB) radiation through inverse Compton scattering, in which the low energy CMB photons receive an average energy boost during collision with the high energy cluster electrons.

Galaxy clusters, which are among the largest objects in the universe, contain enough hot gas to create detectable “shadows” in the light left over from the Big Bang, which also is known as CMB radiation.

“The mythology of the Phoenix–a bird rising from the dead–is a perfect way to describe this revived object,” said Michael McDonald, a Hubble Fellow at the Massachusetts Institute of Technology and the lead author of a paper appearing in the August 16 issue of the journal Nature. “While galaxies at the center of most clusters have been dead for billions of years, the central galaxy in this cluster seems to have come back to life.”

Observations made by NASA’s Chandra X-ray Observatory in space and by the NSF-managed Gemini Observatory and the Blanco 4-meter and Magellan telescopes in Chile corroborate the SPT discovery and show that stars are forming in this object at the highest rate ever seen in the middle of a galaxy cluster. The object also is the most powerful producer of X-rays of any known cluster, and among the most massive of clusters. The data also suggest that the rate of hot gas cooling in the central regions of the cluster is the largest ever observed.

This light has travelled for 14 billion years across the entire observable universe to get to Earth. If it passes through a massive cluster on its way, then a tiny fraction of the light gets scattered to higher energies–the SZ effect.

Predicted in 1972, the SZ effect was first demonstrated to detect previously unknown clusters of galaxies by the SPT collaboration in 2009. Observations of the effect have since opened a new window for astronomers to discover the most massive, distant clusters in the universe.

“The beauty of the SZ effect for cosmology is that it is as easy to detect a cluster of galaxies in the distant reaches of the observable universe as it is for one nearby,” said John Carlstrom, the S. Chandrasekhar Distinguished Service Professor in Astronomy & Astrophysics at the University of Chicago and the SPT’s principal investigator. “The magnitude of the effect depends on the mass of the object and not its distance from Earth.”

About the video: Galaxy clusters, which are among the largest objects in the universe, contain enough hot gas to create detectable “shadows” in the light left over from the Big Bang, which also is known as the cosmic microwave background radiation. The cluster discovered by the South Pole Telescope (SPT) has been dubbed the “Phoenix Cluster” not only because it is located in the constellation of the Phoenix but also because of its remarkable properties. The Phoenix Cluster and its central galaxy and super-massive black hole are already among the most massive known objects of their type. Credit: National Science Foundation

Like other galaxy clusters, Phoenix contains a vast reservoir of hot gas, containing more normal matter than all of the galaxies in the cluster combined. The emission from this reservoir can only be detected with X-ray telescopes like NASA’s Chandra X-ray Observatory. The prevailing wisdom had once been that this hot gas should cool over time and sink to the center of the cluster, forming huge numbers of stars.

However, central galaxies in the cluster have formed very few stars over the last few billion years. Astronomers think that the super-massive black hole in the central galaxy of a cluster pumps energy into the system, preventing cooling of gas from causing a burst of star formation. The famous Perseus Cluster is an example of a black hole bellowing out energy and preventing the gas from cooling to form stars at a high rate.

With the black hole not producing powerful enough jets to halt cooling, the center of the Phoenix cluster is buzzing with stars that are forming 20 times faster than in the Perseus Cluster. This rate is the highest seen in the center of a galaxy cluster and is comparable to the highest seen anywhere in the universe.

The frenetic pace of star birth and cooling of gas in Phoenix are causing both the galaxy and the black hole to add mass very quickly–an important phase that the researchers predict will be relatively short-lived.

“The galaxy and its black hole are undergoing unsustainable growth,” said co-author Bradford Benson, of the University of Chicago. “This growth spurt can’t last longer than about a hundred million years; otherwise the galaxy and black hole would become much bigger than their counterparts in the nearby universe.”

Remarkably, the Phoenix Cluster and its central galaxy and super-massive black hole are already among the most massive known objects of their type. Because of their tremendous size, galaxy clusters are crucial objects for studying cosmology and galaxy evolution, so finding one with such extreme properties as the Phoenix Cluster is significant.

The SPT collaboration has now completed an SZ survey of the 2500 square degrees of the southern sky that began in February 2007. It has found approximately 500 “SZ effect” galaxy clusters and published more than 20 papers in peer-reviewed journals. Further analysis of the collected data could reveal the existence of additional galaxy clusters.

The NSF-funded Physics Frontier Center of the University of Chicago’s Kavli Institute for Cosmological Physics, the Department of Energy’s Argonne National Laboratory, the Kavli Foundation, and the Gordon and Betty Moore Foundation also provide partial support for the SPT.