Anthropologists just love to sink their teeth into a good mystery, and some recent research from NC State and Vassar College has done just that – by looking at what dental development in Homo naledi fossils can tell us about this human relative and the evolution of our own species, Homo sapiens.

In 2013, paleoanthropologists discovered the fossilized remains of at least 15 individual hominins, or human relatives, within the Dinaledi chamber of the Rising Star cave system near Johannesburg, South Africa. The remains were from an entirely new species, dubbed Homo naledi by the researchers. Recently, these fossils were determined to be around 200,000 – 300,000 years old, meaning that H. naledi walked the earth at the same time as other hominins like Neanderthals and possibly the earliest members of H. sapiens. 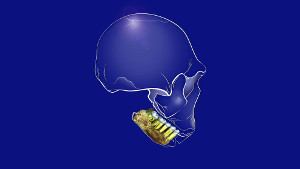 Chris Walker, assistant professor of anatomy at NC State, and Zach Cofran, a biological anthropologist from Vassar College, were researchers on the original team that studied the H. naledi fossils. Recently the duo had the opportunity to examine the dental remains of the youngest members of H. naledi to see if this extinct species grew more like humans or our extinct relatives.

Humans are unique among primates in how long it takes us to fully develop from child to adult. Chimpanzees, our closest living relatives, develop a bit faster than we do. Tooth formation and eruption patterns – the rate and order in which baby and adult teeth grow and emerge – also differ between humans and chimps. Scientists surmise that this difference may be related to the differences in developmental timing between the two species. Most evidence to date has suggested that the human-like pattern emerged quite recently in our evolutionary history and that our extinct relatives were generally more like chimps than humans with respect to dental development.

Walker and Cofran used CT scans of the mandibles of two H. naledi youngsters – one an infant and one an older child – to determine how the species’ teeth formed and emerged. What they discovered was surprising.

“Overall, we found a mixture of human and chimp patterns, although the eruption sequences in particular were human-like,” Walker says. “Given that H. naledi was alive so recently, similarities to humans aren’t necessarily shocking. But given the numerous primitive anatomical features of H. naledi – including a small brain, which is suggestive of a relatively fast, more chimp-like developmental pace – our findings are somewhat unanticipated. Even Neanderthals, a group that is much more anatomically similar to modern humans than H. naledi, have a more primitive dental eruption sequence.”

The uniqueness of the finding may actually raise more questions than it answers regarding H. naledi, and it potentially affects how anthropologists gauge the development times and life histories of ancient hominin species.

“A prolonged period of growth and development is a defining feature of humans, but we don’t know when this trait evolved,” says Cofran. “We’ve relied on teeth to make inferences about growth and development in extinct species because they preserve well in fossil samples and dental maturation has previously been linked to aspects of life history. But this finding, with the similarities between modern humans and H. naledi, raises questions about the adaptive significance of tooth emergence sequences.”

Walker and first author Cofran published their findings in Biology Letters. The paper is open access and can be read here.