Not Much Force: Berkeley Researchers Detect Smallest Force Ever Measured

What is believed to be the smallest force ever measured has been detected by researchers with the Lawrence Berkeley National Laboratory (Berkeley Lab) and the University of California (UC) Berkeley. Using a combination of lasers and a unique optical trapping system that provides a cloud of ultracold atoms, the researchers measured a force of approximately 42 yoctonewtons. A yoctonewton is one septillionth of a newton and there are approximately 3 x 1023 yoctonewtons in one ounce of force.

“We applied an external force to the center-of-mass motion of an ultracold atom cloud in a high-finesse optical cavity and measured the resulting motion optically,” says Dan Stamper-Kurn, a physicist who holds joint appointments with Berkeley Lab’s Materials Sciences Division and the UC Berkeley Physics Department. “When the driving force was resonant with the cloud’s oscillation frequency, we achieved a sensitivity that is consistent with theoretical predictions and only a factor of four above the Standard Quantum Limit, the most sensitive measurement that can be made.” 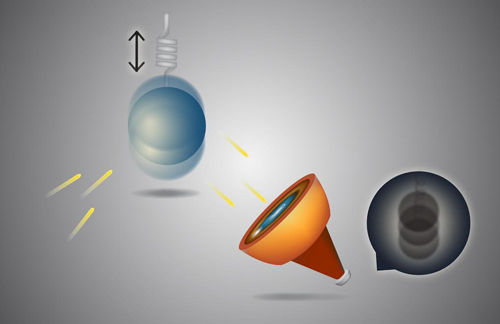 Mechanical oscillators translate an applied force into measureable mechanical motion. The Standard Quantum Limit is imposed by the Heisenberg uncertainty principle, in which the measurement itself perturbs the motion of the oscillator, a phenomenon known as “quantum back-action.” (Image by Kevin Gutowski)

Stamper-Kurn is the corresponding author of a paper in Science that describes these results. The paper is titled “Optically measuring force near the standard quantum limit.” Co-authors are Sydney Schreppler, Nicolas Spethmann, Nathan Brahms, Thierry Botter and Maryrose Barrios.

If you want to confirm the existence of gravitational waves, space-time ripples predicted by Albert Einstein in his theory of general relativity, or want to determine to what extent the law of gravity on the macroscopic scale, as described by Sir Isaac Newton, continues to apply at the microscopic scale, you need to detect and measure forces and motions that are almost incomprehensively tiny. For example, at the Laser Interferometer Gravitational-Wave Observatory (LIGO), scientists are attempting to record motions as small as one thousandth the diameter of a proton.

At the heart of all ultrasensitive detectors of force are mechanical oscillators, systems for translating an applied force into measureable mechanical motion. As measurements of force and motion reach quantum levels in sensitivity, however, they bump up against a barrier imposed by the Heisenberg uncertainty principle, in which the measurement itself perturbs the motion of the oscillator, a phenomenon known as “quantum back-action.” This barrier is called the Standard Quantum Limit (SQL). Over the past couple of decades, a wide array of strategies have been deployed to minimize quantum back-action and get ever closer to the SQL, but the best of these techniques fell short by six to eight orders of magnitude. 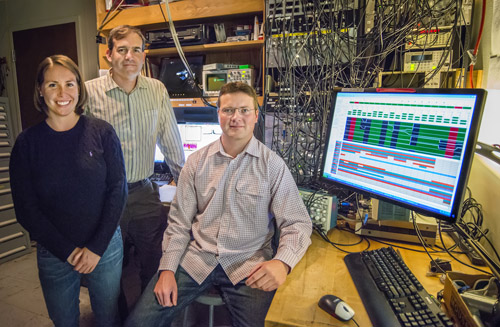 From left, Sydney Schreppler, Dan Stamper-Kurn and Nicolas Spethmann were part of a team that detected the smallest force ever measured using a unique optical trapping system that provides ultracold atoms. (Photo by Roy Kaltschmidt)

“We measured force with a sensitivity that is the closest ever to the SQL,” says Sydney Schreppler, a member of the Stamper-Kurn research group and lead author of the Science paper. “We were able to achieve this sensitivity because our mechanical oscillator is composed of only 1,200 atoms.”

In the experimental set-up used by Schreppler, Stamper-Kurn and their colleagues, the mechanical oscillator element is a gas of rubidium atoms optically trapped and chilled to nearly absolute zero. The optical trap consists of two standing-wave light fields with wavelengths of 860 and 840 nanometers that produce equal and opposite axial forces on the atoms. Center-of-mass motion is induced in the gas by modulating the amplitude of the 840 nanometer light field. The response is measured using a probe beam with a wavelength of 780 nanometers.

“When we apply an external force to our oscillator it is like hitting a pendulum with a bat then measuring the reaction,” says Schreppler. “A key to our sensitivity and approaching the SQL is our ability to decouple the rubidium atoms from their environment and maintain their cold temperature. The laser light we use to trap our atoms isolates them from external environmental noise but does not heat them, so they can remain cold and still enough to allow us to approach the limits of sensitivity when we apply a force.”

To measure force, a cloud of atoms (gray oval) are trapped in an optical cavity created by two standing-wave light fields, ODT A and ODT B. The amplitude of ODT B is varied to create a force that is optomechanically transduced onto the phase of a probe light for measurement. Image credit: Berkeley Lab

Schreppler says it should be possible to get even closer to the SQL for force sensitivity through a combination of colder atoms and improved optical detection efficiency. She also says there are back-action evading techniques that can be taken by performing non-standard measurements. For now, the experimental approach demonstrated in this study provides a means by which scientists trying to detect gravitational waves can compare the limits of their detection abilities to the predicted amplitude and frequency of gravitational waves. For those seeking to determine whether Newtonian gravity applies to the quantum world, they now have a way to test their theories. The enhanced force-sensitivity in this experiment could also point the way to improved atomic force microscopy.

“A scientific paper in 1980 predicted that the SQL might be reached within five years,” Schreppler says. “It took about 30 years longer than predicted, but we now have an experimental set-up capable both of reaching very close to the SQL and of showing the onset of different kinds of obscuring noise away from that SQL.”

This research was supported by the Air Force Office of Scientific Research and the National Science Foundation.

For more about the Dan Stamper-Kurn research group go here