“Greenland is warming rapidly, and such ice-sheet-wide, surface-melt events will occur more frequently over the next couple of decades,” said Dan McGrath, a University of Colorado Boulder doctoral student who works at CIRES. McGrath is lead author of a paper published online May 20 in Geophysical Research Letters and which reports a significant warming trend on the Greenland Ice Sheet.

McGrath and his coauthors calculate that by 2025 ice-sheet-wide melt events will have a 50 percent chance of occurring each year. That would signal the loss of the last major dry-snow zone — regions where the snow stays almost perpetually frozen — in the Northern Hemisphere, McGrath said. 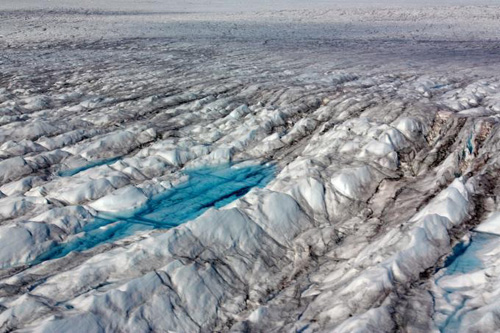 A new study shows summer melt events on the Greenland Ice Sheet are increasing in frequency due to rising temperatures. Photo courtesy CIRES

In the study, the researchers used air and snow temperature data from meteorological stations and boreholes to generate a 60-year record of air temperatures at the Summit research station, the highest and coldest station on the ice sheet.

From 1982 to 2011, near-surface temperatures increased by an average of 0.16 degrees Fahrenheit every year. “This is six times faster than the global average,” McGrath said.

The warming has had a dramatic effect on the ice sheet’s structure, the scientists report. The ice sheet’s ablation zone — the lower parts that lose more snow and ice each year than they accumulate — is expanding up the ice sheet by about 145 feet per year.

“This increases the area over which the ice sheet sheds mass while shrinking the zone that gains mass,” McGrath said. “That will have an obvious impact on the ice sheet’s mass balance.”

Additionally, the dry-snow line — above which the snow doesn’t melt — is migrating up the ice sheet by about 115 feet per year. “These zones are indicators of the health of the ice sheet,” McGrath said. “And the changes we are observing are an early but important sign that the ice sheet is in transition.”

The changes could increase the amount of solar radiation the ice sheet absorbs — since wet snow reflects less sunlight than dry snow — increasing the melt rate as well. It also could potentially speed up the ice sheet’s flow, though more work needs to be done to untangle these impacts.

These findings are supported by results from other researchers who have found that the ice sheet is losing more than 275 billion tons of ice per year — equivalent to the weight of 750,000 Empire State Buildings. “This imbalance is making a significant contribution to sea-level rise,” McGrath said.

The summit of the Greenland Ice Sheet has experienced surface melt in the past, McGrath says. But the melt events in the past were rare, happening once every century or two  — in fact, only eight times in the last 1,500 years — the exception rather than the norm. Now the norm is shifting toward a new, slushy set point.

“Progressive increases in surface melt have occurred throughout the satellite record, but the last decade has been exceptional,” McGrath said. “If each of these events keeps being so far above the average, the average will change to reflect that.”

The scientists’ findings come at a time when Arctic sea ice extent is also at record lows. “Ice-sheet-wide melting coupled with the loss of Arctic sea ice points to profound changes occurring to the Arctic climate system,” McGrath said. “These are not small, insignificant events we’re witnessing.”

CIRES is a joint institute of the National Oceanic and Atmospheric Administration and CU-Boulder.