Today’s chemists might work at a computer as often as in a laboratory, medical researchers studying conditions such as diabetes rely on understanding how cells carry and deposit materials within the body, and average investors in the market increasingly buy index funds to average out the short-term ups and downs of individual stocks.

The discoveries that led to these changes are among the work that was honored by this year’s Nobel Prizes.

On Nov. 6, six University of Delaware faculty members — each with particular expertise in one of the prize-winning areas of study — explained the work and its significance to an audience in UD’s new Interdisciplinary Science and Engineering Laboratory (ISE Lab). The location, which allowed for informal seating and convenient viewing of slide presentations on large wall-mounted monitors, was chosen in part to emphasize the interdisciplinary nature both of the Nobels and of the teaching and research housed in the building.

The College of Arts and Sciences sponsors this series of short lectures each fall, shortly after the Nobel Prizes are announced. Doug Doren, senior associate dean of the college who organizes the event, said the talks offer the general public the opportunity to learn about the prize-winning work in more depth than most news coverage provides.

“Our faculty speakers do research in areas that are closely connected to the work being recognized, and they bring their personal insights to the talks,” he said. 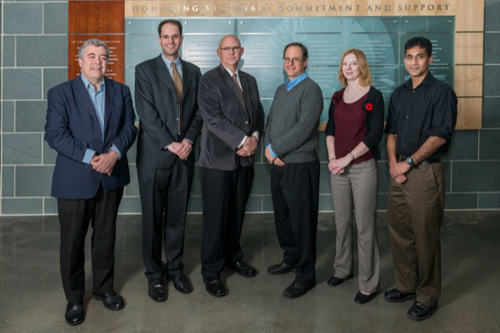 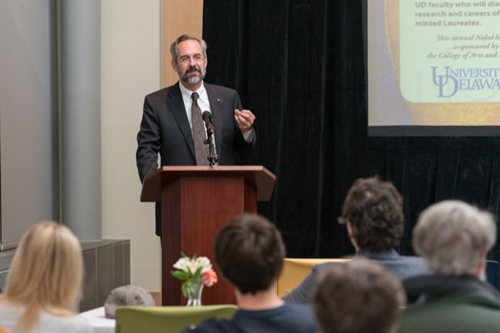 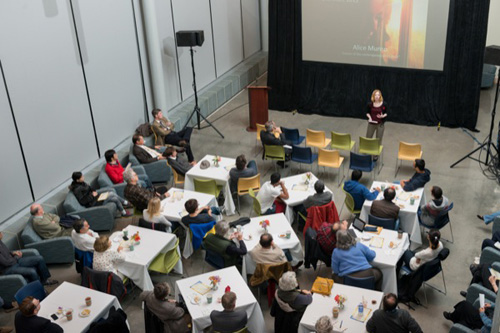 Following are the 2013 prizes discussed at the lecture.

Patel began his talk by saying that chemists want to understand and control the process of molecular transformation, but because atoms and molecules are so small, researchers must create models — in combination with laboratory experiments — in order to make predictions.

In the past, these models were made of plastic balls and sticks, he said, but now supercomputers can be used to make complex virtual models. In the 1970s, this year’s prize-winners made the discoveries that laid the groundwork for today’s computer models.

“What you have now is the ability to do chemistry on a computer,” Patel said.

Kenneth van Golen, associate professor of biological sciences, described the work done by James E. Rothman, Randy W. Schekman and Thomas C. Suedhof, who were awarded the Nobel Prize in Physiology or Medicine for “their discoveries of machinery regulating vesicle traffic, a major transport system in our cells.”

Cells are compartmentalized by their different functions, but substances need to move back and forth between those compartments, van Golen said. The phrase “vesicle traffic” refers to that movement, and all three of the Nobel laureates contributed different aspects of understanding how cells transport their cargo and then unload it in the correct place. Nearly all cellular function depends on vesicle traffic, van Golen said.

“The work of these three … has created an entire field” of study, he said, and has given researchers new insights into such diseases as Alzheimer’s and various immune diseases.

The work of the three laureates “shows us how much we’ve learned about asset prices and how many questions remain unresolved,” Bereskin said. Fama’s work began in the 1960s, he said, and found that markets are difficult to predict in the short term, a finding that has popularized the formation of index funds and that has made the markets more accessible to average investors.

Shiller found in the 1980s that prices fluctuate more than would be expected in an efficient market, and he incorporated the role of investors’ optimism and pessimism in setting prices. Bereskin noted that Shiller has credited his wife — Elizabeth M. Shiller, who earned her doctorate in clinical psychology at UD in 1984 — with exposing him to the idea that psychology might play a role in investors’ behavior.

Siobhan Carroll, assistant professor of English, discussed writer Alice Munro, winner of the literature prize, who was described by the Nobel committee as a “master of the contemporary short story.”

Munro is in the minority among laureates in many ways, Carroll said, not only as a woman and a Canadian but also as a short-story writer, since the literature prize tends to be awarded to novelists or poets. But, she said, Munro’s stories of small-town life and residents are so packed with meaning that they “often cover years in a matter of paragraphs.”

Munro, now in her 80s, is known for the way in which she plays with the element of time in her writing, telling her stories in a way that is more like recalling memories than following an orderly sequence of events. She also demonstrates “an incredible ability” to make ordinary life seem both strange and completely recognizable to readers, Carroll said.

Stuart Kaufman, professor of political science and international relations, described the work of the Organization for the Prohibition of Chemical Weapons (OPCW), awarded the Nobel Peace Prize “for its extensive efforts to eliminate chemical weapons.”

After the Cold War, Kaufman said, global policies shifted from arms control to disarmament, or eliminating entire categories of weapons. The OPCW, he said, was created 20 years ago by the Chemical Weapons Convention and has since overseen the destruction of more than 70 percent of the 1993 worldwide stockpiles of those weapons.

He said the Nobel committee has long favored disarmament and often awards the Peace Prize “to give a boost” of support to a person or group that is engaged in ongoing efforts but has not yet completed its work. But the Peace Prize is almost always controversial, too, and Kaufman said this year’s selection has been criticized because of the OPCW’s work in Syria under an agreement reached by the U.S. and Russia after the Syrian government used chemical weapons against its own people in the continuing civil war there.

The concern, he said, is that the deal “turns a war crime into a diplomatic victory” and makes the Syrian authorities look moderate for destroying their chemical weapons “while they slaughter their population with conventional weapons.”

Stephen Barr, professor of physics and astronomy, explained the physics prize, given to Francois Englert and Peter W. Higgs for the theoretical prediction of “a mechanism that contributes to our understanding of the origin of mass of subatomic particles … recently confirmed through the discovery of the predicted fundamental particle.”

Barr began by describing the concept that objects exert influence on others across space, as in the moon’s effect on Earth’s tides. “Action at a distance is a strange and spooky idea,” he said, adding that space is not empty but rather is filled with gravitational, electromagnetic and other types of fields.

Englert and Higgs were working independently in 1964 when each proposed a theory of how particles acquire mass by interacting with a particular field, now called the Higgs field. The field they hypothesized became a key part of the Standard Model of particle physics, which describes how everything in existence is made up of a relatively small number of building blocks, or matter particles.

In 2012, researchers at the Large Hadron Collider in Switzerland confirmed the existence of the Higgs particle.

– Article by Ann Manser, with information from the Nobel Prize organization