Nobel in Physics: A long time in the making

Nearly 50 years of experiments and billions of dollars in equipment followed the prediction of the Higgs mechanism by theoretical physicists in 1964. Ulrich Heintz and Meenakshi Narain, two of the particle physicists at Brown University who worked on experiments at Fermilab and at CERN, note that the successful search for the Higgs was caried on by thousands of researchers.

The Nobel Prize awarded today to Francois Englert and Peter Higgs was a long time in the making. The Higgs mechanism was invented almost 50 years ago, and ever since the standard model emerged as the explanation of everything in particle physics that we have observed so far. The search for the Higgs boson was a quest that heated up for particle physics experimenters with every new facility that came online. Some of us (Heintz, Narain) looked for it in their thesis experiment at the Cornell Electron Storage Ring in the 1980s. Then the search moved to European Organization for Nuclear Research (CERN) to the Large Electron Positron Collider, and back again to the Tevatron at Fermilab near Chicago, where we (Cutts, Heintz, Landsberg, Narain) were part of the discovery of the top quark in 1995 with the D-Zero experiment.

However, nature made the Higgs boson massive enough that we needed the Large Hadron Collider (LHC) to produce it in the laboratory. Staggeringly high energies were needed so that we could confirm by experiment that the Higgs boson indeed exists and that the mathematical construct that we call the Higgs mechanism is actually reflected in nature. 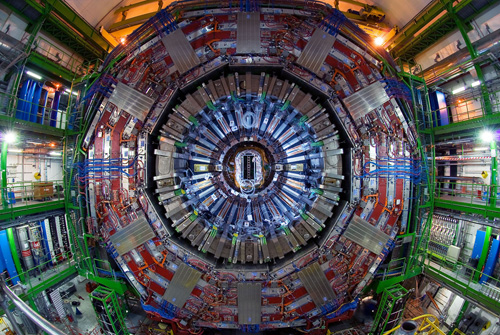 A research tool for the 21st century. “Nature made the Higgs boson massive enough that we needed the Large Hadron Collider to produce it in the laboratory. Staggeringly high energies were needed so that we could confirm by experiment that the Higgs boson indeed exists.” Image credit: Brown University

Last year, on July 4, 2012, the ATLAS and compact muon solenoid (CMS) Collaborations at the LHC announced that they had observed a particle that fit the description of the Higgs boson. Brown professors David Cutts, Ulrich Heintz, Greg Landsberg, and Meenakshi Narain and their research groups are part of the CMS Collaboration and contributed in various ways to the discovery. At the same time, the Tevatron also saw indications of the Higgs boson, albeit not with the same significance as the LHC experiments. The work done by the experiments since reinforced the conclusion the new particle was a Higgs boson. This is an important moment in particle physics, as the Higgs discovery completes the standard model and allows us to move beyond it to discover what comes next.

This moment has been made possible by the theorists who had the idea in the first place. It was also made possible by the vision and tenacity of the experimenters who made the LHC happen. Unfortunately the statutes of the Nobel Foundation did not foresee that for some important discoveries thousands of people would be needed. As it is, the prize isn’t even big enough to include all the theorists who came up with the idea in 1964. Nevertheless, we are glad that at Brown we can claim our share in both the experimental verification of the existence of the Higgs boson through our involvement in the CMS experiment as well as in its theoretical origins through our colleague, Professor Gerald Guralnik. Presumably this was the last Nobel Prize awarded to an aspect of the standard model. We are looking forward to the first Nobel Prize awarded for the discovery of physics outside of the standard model.