Acclaimed by her peers in the United States as “possibly the greatest woman scientist of the 20th century” and known in her native New Zealand as a “world leader in modern cosmology and one of the most creative and significant theoreticians in modern astronomy,” the late Yale astronomer Beatrice Tinsley has certainly earned a place in the annals of history.

Now she’s earned a place in the World Atlas as well.

The New Zealand Geographic Board has named a mountain after Tinsley, a Yale professor of astronomy from 1975 until her death in 1981. The Kepler Mountains —named after 17th-century German astronomer Johannes Kepler — now includes Mount Tinsley near Fiordland, southern New Zealand. 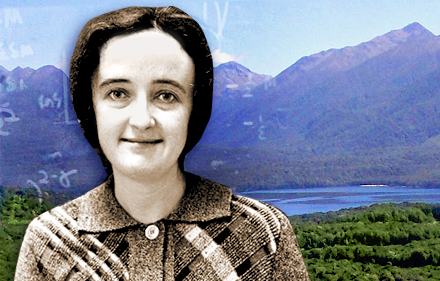 The proposal for the honor was initially put forward in 2008 by Aaron Nicholson, an amateur historian who felt it was appropriate for the astronomer to be honored in the only mountain range in New Zealand already named after a legendary astronomer.

“The International Year of Astronomy was coming up [in 2009] … so I thought it would be nice to have a place where our famous astronomers could have a place to live,” he told the Southland Times.

This is not the first posthumous honor awarded to Tinsley. Her many tributes include a major astrophysics research institute at the University of Canterbury, a professorship at the University of Texas-Austin, and the American Astronomical Society’s Beatrice M. Tinsley Prize, which recognizes “an outstanding research contribution to astronomy or astrophysics, of an exceptionally creative or innovative character.”

Tinsley’s research focused on galaxy evolution and star populations. Her work contributed to methods for determining the size and rate of expansion of the universe.

Her colleagues at Yale and elsewhere in the astronomy community fondly remember her as both a talented scientist as well as a kind human being who was always thirsty for knowledge.

“She gathered up astronomical information as if she were a magnet,” Richard Larson, a Yale astronomy professor who worked with Tinsley, told the late professor’s biographer, Christine Cole Catley. “She was like a vast, intellectual vacuum cleaner, gathering it from the literature, from anyone she could talk to, and from her own ideas, bringing everything together. And everything was to answer the big questions about the universe.”

“I do believe Beatrice was a genius,” James Gunn, a Princeton professor and one of today’s most prominent astronomers, says in Catley’s biography. “If she had lived, many of today’s problems would have been solved.”