New York City is establishing itself as a global leader in forming a proactive response to climate change, reveals a new report detailing the city’s plans to adapt to the challenges and opportunities the changing climate presents.

The plans, revealed in the first report of the New York City Panel on Climate Change (NPCC) and published in the Annals of the New York Academy of Sciences, outline the measures the city will take to proactively respond to climate change in a way that will provide both long-term environmental, and short-term economic, benefits to the city.

“Cities are at the forefront of the battle against climate change. We are the source of approximately 80% of global greenhouse gas emissions. And as the climate changes, densely populated urban areas—particularly coastal cities—will disproportionately feel the impacts,” said New York City Mayor Michael R. Bloomberg.

“Those of us in local government recognize the importance of national and international leadership on climate change. But we are not waiting for others to act first.”

Established by Mayor Bloomberg in 2008, the NPCC report outlines a powerful and original framework for deploying sophisticated risk management tools to address the city’s climate adaptation challenges, particularly the challenges posed to the city’s energy, transportation, water, and communication systems. 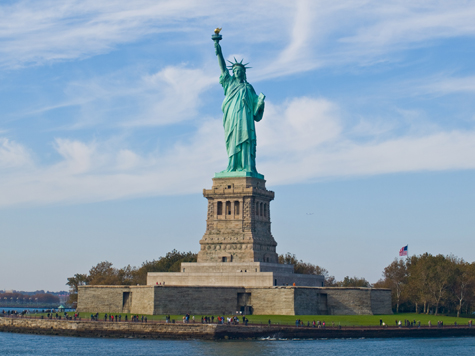 About the image above: ‘Statue of Liberty’ on Liberty Island, New York. Image credit: William Warby

The new NPCC plan recognizes that these actions will not stop climate change alone and points to the climate risks already facing the city, such as heat waves, blackouts, flooding, and coastal storms.

In response to these challenges the NPCC calls for New York City to begin to adapt to climate change immediately and proposes the creation of flexible Adaptation Pathways, strategies that evolve through time as climate risk assessment, evaluation of adaptation strategies, and monitoring continue.

The report demonstrates how New York City has developed an effective approach to climate change adaptation by presenting the challenges of adaption as win–win opportunities for city managers. For example, cutting down on greenhouse gases has already provided economic savings to both the public and private sectors.

In addition, approaches to climate change adaptation can be incorporated into the management of the city’s infrastructure, such as recalibrating building design standards to include climate change projections, expanding the legal framework governing the design and operation of infrastructure to include the impacts of climate change, and engaging with the insurance industry so that it contributes to adaptation strategies by creating products that respond to and recognize long-term risks.

The NPCC suggests that all agencies and organizations that manage infrastructure adaptation strategies should draw from a range of responses, including adjustments in operations and management, capital investments in infrastructure, and development of policies that promote flexibility.

The NPCC proposes several recommendations for action, focusing on critical infrastructure and alignment with broader-scale actions, including the creation of a climate change monitoring program to track and analyze key climate change factors, impacts, and adaptation indicators across the city, as well as studying relevant advances in research on related topics.

“Planning for climate change today is less expensive then rebuilding an entire network after a catastrophe. We simply can’t wait to plan for the effects of climate change” concludes Mayor Bloomberg.

“The NPCC. . . will help ensure that we create a greener, greater New York for future generations.”

1 comment on “New York City is Preparing for Climate Change”