New Use for Kinect: Teaching Kids in Africa

*Microsoft employee Larry Venter, a native South African, had a hunch that Kinect for Xbox 360 could help the children at a rural school in his hometown get excited about learning English and that gaming could help in the fight against widespread illiteracy.*

REDMOND, Wash. – A story that began with a mischievous Icelandic volcano has ended happily with South African schoolchildren using Kinect for Xbox 360 to learn English.

The Icelandic volcano Eyjafjallajökull was causing chaos a year ago when its ash cloud stranded travelers all over Europe and beyond, including employee Larry Venter, who was vacationing in his native South Africa.

“It turned out not to be a tragedy,” said Venter, a senior director for Microsoft Retail Solutions. Venter’s friend Yunus Kirsten used the extra time to take Venter on an unplanned tour of an area primary school that he leads.

Venter had mixed feelings about what he saw at the school in Vryheid, a small town in the eastern KwaZulu-Natal province of South Africa. There, children are taught English and their local language, Zulu, until the fourth grade, after which they are taught solely in English. Most children at the school—called Lakeside Park Primary school—are poor and have few English-learning resources at home. As a result, literacy acquisition is a real challenge. The language the children spoke when they played (the language spoken during play is a main indicator of how effective language learning is) was not English, but Zulu.

“They have no one at home to help them with their homework or to help teach them English,” Venter said. “Only 53 percent of children who start schooling in South Africa will finish it, and most of that is a result of poor education in the foundation phase.” 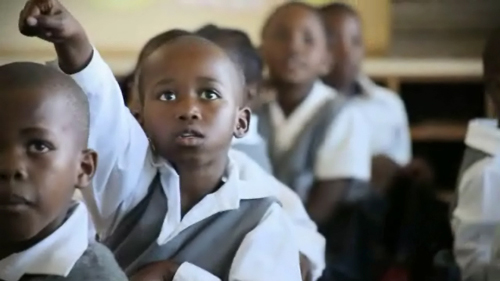 Lakeside Park Primary School Student. Lessons and languages are more likely to sink in for young learners (like this one at Lakeside Park Primary school in South Africa) when the children are engaged and having fun, said Larry Venter, a senior director for Microsoft Retail Solutions. Image credit: Microsoft

At the same time, Venter saw that Kirsten, the headmaster of Lakeside Park Primary school, and the teachers were relentlessly trying to find ways to help the children learn.

“Here’s a headmaster who after 24 years is still restless to find better solutions for his learners, and he has a staff that won’t accept the status quo,” he said.

Venter made a note to himself to load up 20 or so notebook computers with software and games to send to the school.

After the volcano finally settled enough for Venter to return home, he was at a Microsoft Store opening in San Diego watching people wander in and become immersed in playing Kinect with no previous experience. Unlike technology with keyboards or mice, with Kinect there was no difficulty in approaching the technology. The experience and interaction with Kinect was uninhibited, Venter thought, and was perfect for the young learners.

“I thought, ‘This is the perfect technology to see if we can go and prove the premise that structured gaming in the classroom will help with language and generally improve literacy acquisition,'” he said.

Venter decided to put together a plan for getting Kinect in classrooms at Lakeside Park Primary school, and each week he and fellow Microsoft employees Curtis Young, Chris Jensen, Rebecca Roedell, Anna Kinney and Frank Chiappone met to put that plan into action.

After the group found internal funding for the project, they procured the hardware and found a way to make sure it would not be stolen from classrooms. They also had an educational expert create a module that would allow the school’s teachers to use current Kinect games to create learning opportunities for the children. For example, teachers use the bowling game to boost numeracy skills or build an avatar to teach the English words for parts of the body.

“We also put a measurement system in place so at the end of the year, we will be able to prove the impact that structured gaming has had on the young learners,” Venter said.

In January, the Kinect sensors and Xbox 360 consoles were installed, and the children started playing. The results were immediate.

About the video: Watch a video about an innovative new use for Kinect—using the controller-free gaming device for Xbox 360 in the classroom to engage young learners. Children at Lakeside Park Primary school in South Africa are using Kinect to help learn English. Credit: Microsoft

“One teacher with more than 20 years of teaching experience said that the level of interaction she saw in the classroom within the first week would ordinarily take four or five months to achieve,” Venter said. “Within the first week, the children were helping each other learn and using English sentences while they played, like saying ‘push the ball’ while bowling. The benefits of this are just fantastic.”

As Venter returned from a March visit to the school, he saw that a South African national newspaper had run a story on what was happening there, and by the time he landed in the United States, the story had gone viral. The story was picked up by newspapers and blogs worldwide.

“It feels like this is a perfect opportunity and perfect timing,” Venter said. “It turns out students learn a lot quicker if you give them something that’s exciting, and that’s what’s happening here. We’ve just scraped the tip of this iceberg—there’s so much potential here.”

Last week, Bill Gates announced that his foundation would be investing $20 million in educational gaming, Venter said. Educational games that use controller-free Kinect could become a major factor in helping engage and teach students worldwide.

“My hope is that we can find a broad application for this and eventually get to the place where there’s a wide selection of games to support education,” Venter said. “It’s a whole new frontier. I think there’s one company in the world right now with the assets that, if lined up correctly, could help the educational crisis we’re seeing globally, and that company is Microsoft.”