GAINESVILLE, Fla. — A new University of Florida study that determined the age of skeletal remains provides evidence humans reached the Western Hemisphere during the last ice age and lived alongside giant extinct mammals.

The study published online today (May 3, 2012) in the Journal of Vertebrate Paleontology addresses the century-long debate among scientists about whether human and mammal remains found at Vero Beach in the early 1900s date to the same time period. Using rare earth element analysis to measure the concentration of naturally occurring metals absorbed during fossilization, researchers show modern humans in North America co-existed with large extinct mammals about 13,000 years ago, including mammoths, mastodons and giant ground sloths.

“The Vero site is still the only site where there was an abundance of actual human bones, not just artifacts, associated with the animals,” said co-author Barbara Purdy, UF anthropology professor emeritus and archaeology curator emeritus at the Florida Museum of Natural History on the UF campus. “Scientists who disputed the age of the human remains in the early 20th century just did not want to believe that people were in the Western Hemisphere that early. And 100 years later, every single book written about the prehistory of North America includes this site and the controversy that still exists.”

Following discovery of the fossils in South Florida between 1913 and 1916, some prominent scientists convinced researchers the human skeletons were from more recent burials and not as old as the animals, a question that remained unanswered because no dating methods existed. 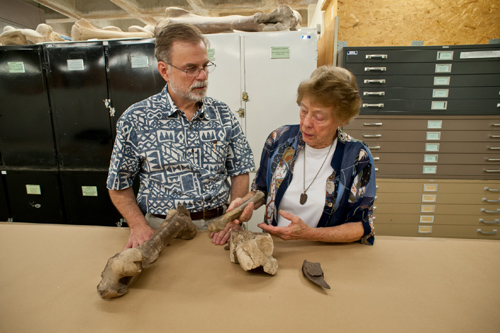 In this photo taken May 2, 2012, Bruce MacFadden, vertebrate paleontology curator at the Florida Museum of Natural History on the University of Florida campus, discusses late Pleistocene mega fauna with Barbara Purdy, UF anthropology professor emeritus and Florida Museum archaeology curator emeritus, who is holding the toe bone of an extinct horse species uncovered at the Vero Beach archaeological site. The researchers co-authored a study published online May 3, 2012, in the Journal of Vertebrate Paleontology using rare earth element analysis to show modern humans in North America co-existed with large extinct mammals about 13,000 years ago. An extinct horse femur, from left, giant sloth anklebone and sloth claw are displayed on the table in the Florida Museum collections. Photo by: Kristen Grace/Florida Museum of Natural History

The little information known about the first humans to appear in North America is primarily based on bone fragments and artifacts, such as stone points used for hunting. Other sites in California, Montana and Texas show human presence around the same time period based on artifacts, but two nearly complete human skeletons were discovered at the Vero Beach site.

As bones begin to fossilize they absorb elements from the surrounding sediment, and analysis is effective in distinguishing different-aged fossils deposited in the same locality. Instead of radiocarbon dating, which requires the presence of collagen in bones, researchers used mass spectrometry to compare rare earth elements in the specimens because a lack of collagen in the Vero Beach specimens made radiocarbon dating impossible, Purdy said.

Researchers analyzed samples from 24 human bones and 48 animal fossils in the Florida Museum’s collections and determined the specimens were all from the late Pleistocene epoch about 13,000 years ago. While rare earth element analysis method is not as precise as radiocarbon dating, Purdy said the significance of human skeletons found in Vero Beach is unquestionable in terms of their presence in the Western Hemisphere.

“It is important to note that they [the authors] did not provide an absolute or chronometric date, rather the geochemistry shows that the trace elemental geochemistry is the same, thus the bones must be of the same age,” said Kenneth Tankersley, an assistant professor in the University of Cincinnati anthropology and geology departments.

Native fauna during the last ice age ranged from extinct jaguars and saber-toothed cats to shrews, mice and squirrels still present in Florida. Researchers speculate humans would have been wanderers much like the animals because there was less fresh water than in later years, Purdy said.

“Humans would have been following the animals for a food supply, but that’s about all we know,” Purdy said. “We know what some of their tools looked like and we know they were hunting the extinct animals but we know practically nothing about their family life, such as how these ancient people raised their children and grieved for their dead.”

“Vero is a historical context for the development of archaeology — these are the beginnings of the people of America,” MacFadden said. “The site is well-known in the literature but has been discounted, so we’re sort of reviving an understanding of this important locality and using newer techniques to revive the question about the antiquity of the humans.”