North Carolina State University researchers have a developed a technique for efficiently producing nanoscale gold rods in large quantities while simultaneously controlling the dimensions of the nanorods and their optical properties. The optical properties of gold nanorods make them desirable for use in biomedical applications ranging from imaging technologies to cancer treatment.

“This technique should facilitate the economical manufacture of large volumes of gold nanorods,” says Dr. Joseph Tracy, an associate professor of materials science and engineering at NC State and senior author of a paper on the work. “And that should be good news for both the science community and the biomedical research and development community.” 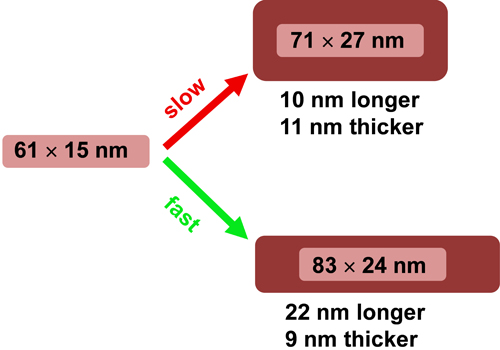 Researchers found they could control the dimensions of the nanorods by varying how quickly they added ascorbic acid. Image credit: North Carolina State University

The NC State team started with an existing technique, in which gold nanorods are formed by mixing two chemical solutions together. However, that technique only converts 30 percent of the gold into nanorods – the rest remains dissolved in solution.

To convert the remaining 70 percent of the gold into nanorods, the researchers added a continuous stream of ascorbic acid (better known as vitamin C) to the solution, while constantly stirring the mixture. The ascorbic acid essentially pulls the gold out of the solution and deposits it on the existing nanorods.

“The ability to fine-tune these optical properties will likely be useful for the development of new biomedical applications,” Tracy says.

The paper, “Large-Scale Synthesis of Gold Nanorods through Continuous Secondary Growth,” is published online in Chemistry of Materials. Lead author of the paper is Krystian Kozek, a former NC State undergraduate. Co-authors include Klaudia Kozek, an NC State undergraduate who worked on the project while in high school; and Wei-Chen Wu and Sumeet Mishra, who are both Ph.D. students at NC State. The work was supported by the National Science Foundation (NSF) grant DMR-1056653, the NSF’s Research Triangle MRSEC grant DMR-1121107 and the National Institutes for Health grant 1R21HL111968-01A1.