Titanium dioxide most commonly comes in one on of two major “phases,” meaning that its atoms arrange themselves in one of two crystalline structures. These phases are “anatase” or “rutile.” The arrangement of atoms dictates the material’s optical, chemical and electronic properties. As a result, each phase has different characteristics. The anatase phase has characteristics that make it better suited for use as an antibacterial agent and for applications such as hydrogen production. The rutile phase is better suited for use in other applications, such as photovoltaic cells, smart sensors and optical communication technologies. 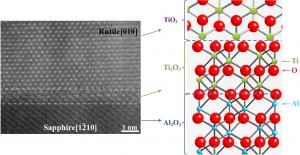 The new technique allows researchers to control the phase of the titanium dioxide by modifying the structure of the titanium trioxide and sapphire substrate. Image credit: North Carolina State University

“Traditionally, it has been a challenge to stabilize titanium dioxide in the desired phase,” says Dr. Jay Narayan, John C. Fan Distinguished Chair Professor of Materials Science and Engineering at NC State and co-author of a paper describing the work. “The material tends to transform into the anatase phase below 500 degrees Celsius [C], and transform into the rutile phase at temperatures above 500 C.

“We have now developed a technique that precisely controls the phase, or crystalline structure, of titanium dioxide at room temperature – and stabilizes that phase, so it won’t change when the temperature fluctuates. This process, called phase tuning, allows us to fine-tune the structure of the titanium dioxide, so that it has the optimal structure for a desired application.”

The paper, “Domain epitaxy in TiO2/[alpha]-Al2O3 thin film heterostructures with Ti2O3 transient layer,” was published online June 20 in Applied Physics Letters. The paper was co-authored by M.R. Bayati and R. Molaei, Ph.D. students at NC State; Dr. Roger Narayan, a professor in the joint biomedical engineering department of NC State and the University of North Carolina at Chapel Hill; Dr. H. Zhou, a postdoctoral researcher at NC State; and Dr. S.J. Pennycook of Oak Ridge National Laboratory. The research was funded by the National Science Foundation.

The researchers have also demonstrated how this technique can be used with silicon computer chip substrates, which can be integrated into electronics such as smart sensors.