AUSTIN, Texas — A team of chemical engineers at The University of Texas at Austin has developed a new, cost-effective method for synthetically producing a biorenewable platform chemical called triacetic acid lactone (TAL) that can be used to produce innovative new drugs and sustainable plastics at an industrial scale, as described in the Proceedings of the National Academy of Sciences.

Led by Hal Alper, professor in the McKetta Department of Chemical Engineering in the Cockrell School of Engineering, the team’s new method involves engineering the yeast Y. lipolytica to increase production of TAL, a polyketide, to levels that far exceed current bioproduction methods. This was accomplished by rewiring metabolism in the yeast through synthetic biology and genetic engineering. Ultimately, the research team increased production capacity tenfold, enabling polyketides to be mass-produced for incorporation into a variety of new applications in industry. 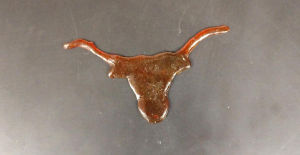 Polyketides are an important class of naturally derived molecules that can be used to make many useful products such as nutritional supplements, specialty polymers, pigments and pharmaceuticals. Currently, there are more than 20 drugs derived from polyketides on the market, including immunosuppressants, statins and antimicrobials.

Up to this point, synthetic production of polyketides has been constrained by technical challenges, limiting practical applications for consumer- and industry-based needs. In particular, most technologies have limited product yields resulting in difficult chemical synthesis and poor economics. The UT Austin team’s breakthrough could change that.

Using their new method, the researchers were able to purify TAL directly from a bioreactor to make a new plastic material that can be formed into a film and is seen to exhibit an orange hue and relative transparency.

“We hope to open up new product and industrial opportunities in the chemical and pharmaceutical spaces,” Alper said. “Our engineering efforts in TAL showcase that we can rewire metabolism to create renewable solutions to traditional chemical manufacturing.”

The UT Austin Office of Technology Commercialization has filed U.S. patent applications for the technology and is working to secure worldwide patents. The office is seeking commercial partners who have interest in improving the economics of polyketide production or creating new materials or products from polyketides.

“An important role for our institution, as one of the nation’s leading public research universities, is to move UT Austin’s research from the laboratory to useful products and services for the marketplace,” said Dan Sharp, director of the UT Austin Office of Technology Commercialization. “Research like this addresses that priority and provides society with innovative solutions that grow our economy and improve the quality of life.”

This work was funded by the Camille and Henry Dreyfus Foundation and the Welch Foundation.