“A giant rhino with a ridiculously supersized head”

“Fifteen long, pointed sideways oriented eye horns: one over the nose, one atop each eye, one at the tip of each cheek bone, and ten across the rear margin of the bony frill”

“A horned face: large horn over the nose and short, blunt eye horns that project strongly to the side”Such phrases have been used to describe two newly discovered species of dinosaurs with looks only a mother could love. Still, they are drawing the attention and inspiring the imagination of scientists and lay people alike. 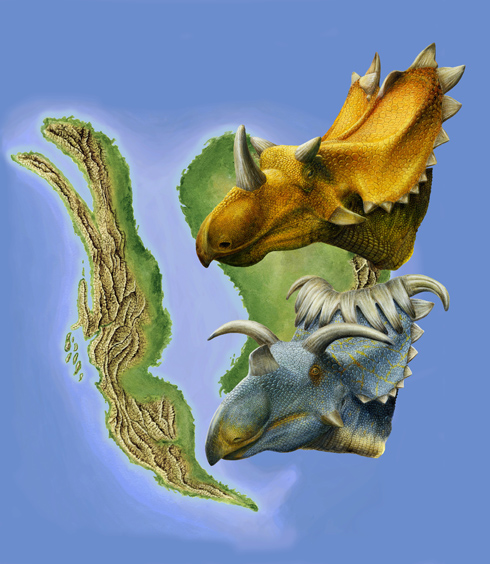 Announced yesterday in PLoS ONE, the online open-access journal produced by the Public Library of Science, two new species of horned dinosaurs–Utahceratops gettyi and Kosmoceratops richardsoni–have been found in Grand Staircase-Escalante National Monument in southern Utah. Close relatives of the famous Triceratops, these giant plant eaters were once inhabitants of the “lost island continent” of Laramidia, a swampy, subtropical setting formed when a shallow sea flooded the central region of North America, isolating the eastern and western portions of the continent for millions of years during the late Cretaceous period. 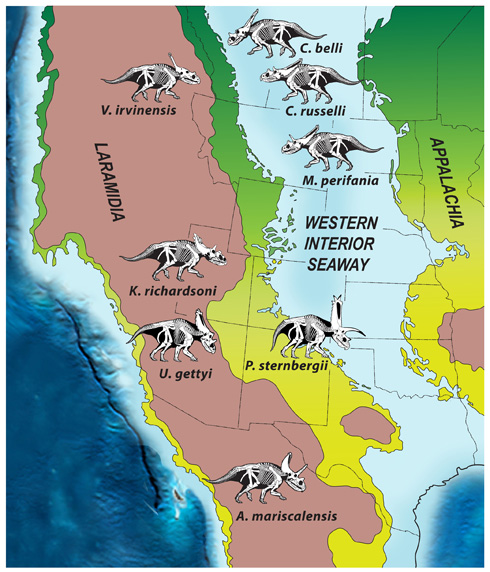 About the image: Dinosaur distribution on the continent. Image credit: Utah Museum of Natural History

“My enthusiasm for these findings is threefold,” said Raymond Bernor, program director of the Sedimentary Geology and Paleobiology Program at the National Science Foundation (NSF). “First, researchers discovered two new, exciting dinosaur species. Second, the research has accomplished a major advance in understanding the biogenographic provinciality of Western North American dinosaur communities that apparently included separate northern and southern populations. And third, this discovery has inspired future discoveries in the Grand Staircase-Escalante National Monument, which has now emerged as one of the most important paleontological reserves in the world.” 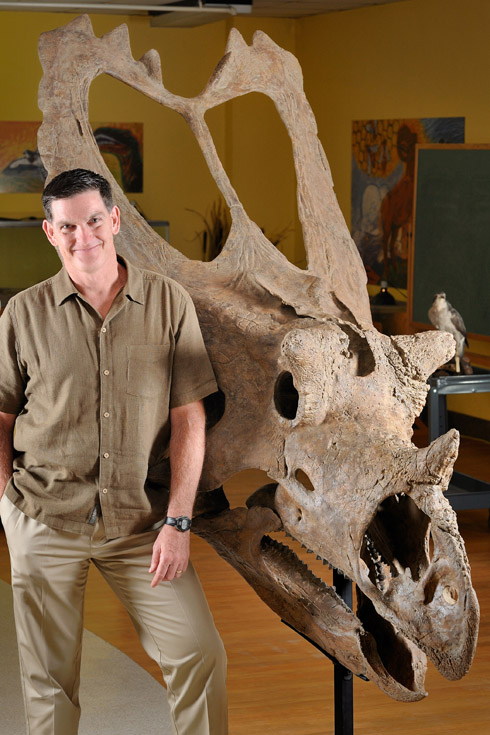 About the image: Scott Sampson with the skull of Utahceratops gettyi, measuring about seven feet long. Image credit: Utah Museum of Natural History

But what about these ugly, horned creatures … Although much speculation has ensued about the function of the ceratopsian horns and frills of these prehistoric monsters–from fighting off predators to recognizing other members of the same species or controlling body temperature–the dominant idea today is that these features functioned first and foremost to enhance reproductive success. Scott Sampson, first author on the paper, explains, “Most of these bizarre features would have made lousy weapons to fend off predators. It’s far more likely that they were used to intimidate or do battle with rivals of the same sex, as well as to attract individuals of the opposite sex.”