Scientists from the Woods Hole Oceanographic Institution (WHOI) are kicking off an innovative NOAA-funded pilot program using robotic instruments and computer modeling analysis to shed light on changing ocean conditions in the Gulf of Maine as they relate to the harmful algal bloom (HAB) phenomenon commonly known as the New England red tide.

The red tide is caused by the germination of dormant cysts of alga called Alexandrium fundyense, which produces a toxin that can cause paralytic shellfish poisoning (PSP). These cysts are found in bottom sediments and near-bottom waters, accumulating in “seedbeds” that serve as the source of swimming, rapidly dividing cells that form the blooms each spring.

Researchers typically base the annual red tide forecast on the abundance of cysts in bottom sediments combined with a computer model that simulates a range of bloom scenarios based on previous years’ conditions.  While this approach provided useful forecasts for most of the years since 2006, the bloom potential for both 2010 and 2013 was not realized. In those years warmer, fresher (less salty), low-nutrient waters in the Gulf of Maine were present, which likely suppressed the blooms.

“We are seeing oceanographic conditions that are different from those used to make our past forecasts, and thus and we are adapting our modeling and observational efforts to meet this challenge,” said WHOI biologist Don Anderson.

The Environmental Sample Processor (ESP) automatically collects a sample of water and then rapidly tests it for DNA and toxins that are indicative of targeted species and substances they may produce. (Illustration by E. Paul Oberlander, Woods Hole Oceanographic Institution)

This year, researchers will deploy four robotic instruments called Environmental Sample Processors (ESP) that will measure bloom concentration and toxins at multiple locations along the Gulf of Maine and provide near real-time data on toxic algae to land-based personnel. Developed by the Monterey Bay Aquarium Research Institute, the ESPs are molecular biology labs packed inside canisters the size of kitchen garbage cans.  They automatically collect a sample of water and then rapidly test for DNA.

The ESPs were tested off the coast of Portsmouth, NH, during 2011 and 2012, and then two of the instruments were deployed in 2013. NOAA’s Integrated Ocean Observing System (IOOS) provided funding to double the number of ESPs deployed in the Gulf of Maine in 2014, as part of the WHOI-led pilot project funded by NOAA’s Monitoring and Event Response for Harmful Algal Bloom (MERHAB) program that is demonstrating how to integrate these sensors into HAB observing and forecasting systems. 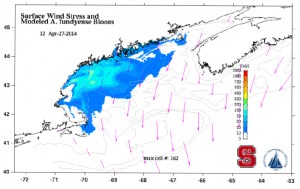 Three ESPs were successfully deployed on May 3-4 and are already transmitting data to shore, indicating that low cell concentrations of the toxic Alexandrium are present in the nearshore waters of western Maine. A fourth will be deployed later in the season.

“U.S. IOOS is very happy to be involved in this project and a simultaneous effort in California that merge ocean observing assets and computer models for HAB forecasts,” said Zdenka Willis, director of the U.S. IOOS Program. “The goal is to provide valuable early warning information and ongoing bloom status so decision makers can keep people safe.”

The ESPs in the Gulf of Maine will also carry a sensor developed by NOAA’s National Centers for Coastal Ocean Science (NCCOS) and WHOI that can measure concentrations of the PSP toxin.

“NCCOS is pleased with progress being made in demonstrating the readiness of ESPs for HAB early warning,” said Marc Suddleson, manager of the National Center for Coastal Ocean Science MERHAB program. “The WHOI pilot is paving the way for adding algal cell abundance and toxin data from offshore observing systems into early warning and forecast products to help manage Gulf of Maine shellfisheries and HAB impacted resources in other U.S. regions.”

Results from the ESPs will add critical data to weekly real-time forecasts of New England red tide this year distributed to more than 150 coastal resource and fisheries managers in six states as well as federal agencies such as NOAA, the FDA and the EPA.

“The ESPs are not a replacement for state-run programs that monitor naturally occurring marine toxins in shellfish,” said Kohl Kanwit, Director of the Bureau of Public Health for the Maine Department of Marine Resources. “Instead, they provide valuable data on the algal cells and associated toxins in coastal waters, giving managers early warning and a more complete picture of the magnitude and distribution of HAB events.”

It is expected that one or more of the ESPs will become part of the regional ocean observatory network managed by the Northeastern Regional Association of Coastal and Ocean Observing Systems (NERACOOS), which currently consists of 12 instrumented buoys that measure currents, salinity, temperature and meteorological variables at multiple locations in the Gulf of Maine and Long Island Sound.

“Data from NERACOOS buoys have been incredibly helpful in our efforts to diagnose the mechanisms underlying the suppressed Alexandrium blooms in 2010 and 2013,” said WHOI senior scientist Dennis McGillicuddy, who is one of those responsible for the bloom forecasting efforts. “The 2014 forecast based on cyst abundance is that we will have a moderate Alexandrium outbreak, but recent data from NERACOOS buoys indicate that conditions are similar to 2010 and 2013, suggesting the bloom could be suppressed again this year.”

Data from the ESP network will also inform a project on HABs supported by the Woods Hole Center for Oceans and Human Health through funding from the National Science Foundation and the National Institute for Environmental Health Sciences.  In particular, the real-time data will be used to trigger rapid-response sampling of key bloom processes using WHOI’s coastal research vessel R/V Tioga.

Note: Two ESPs off Huntington Beach, CA, are providing data on levels of a different HAB species and toxin that affect humans as well as wildlife and fishery resources. These ESPs are also a component of a multi-sensor array whose output will inform regional HAB forecasting models. This project is led by University of California Santa Cruz, Monterey Bay Aquarium Research Institute, University of Southern California, and also involves IOOS Regional Associations, with support from NOAA’s ECOHAB program (Ecology and Oceanography of HABs).