EAST LANSING, Mich. — Health professionals may soon have a new method of diagnosing Parkinson’s disease, one that is noninvasive and inexpensive, and, in early testing, has proved to be effective more than 90 percent of the time.

In addition, this new method has the potential to track the progression of Parkinson’s, as well as measure the effectiveness of treatments for the disorder, said Rahul Shrivastav, professor and chairperson of Michigan State University’s Department of Communicative Sciences and Disorders and a member of the team developing the new method.

It involves monitoring a patient’s speech patterns – specifically, movement patterns of the tongue and jaw.

“In Parkinson’s disease, a common limitation is that the movements become slow and have a reduced range,” said Shrivastav. “We believe we see this pattern in speech too – the tongue doesn’t move as far as it should, doesn’t move as quickly as it should and produces subtle changes in speech patterns.”

This method is particularly sensitive to Parkinson’s disease speech and, Shrivastav said, is effective with only two seconds of speech.

“That’s significant in several ways: The detection methodology is noninvasive, easy to administer, inexpensive and capable of being used remotely and in telemedicine applications,” he said. 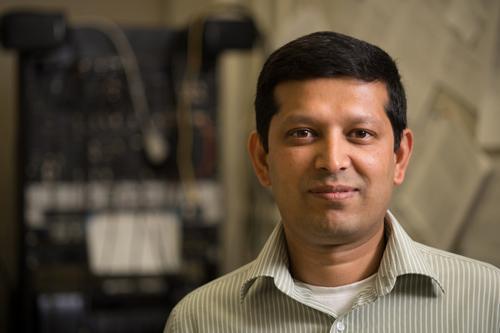 Rahul Shrivastav is part of a team that has developed a new method of diagnosing Parkinson's disease. The method monitors a patient's speech patterns and is noninvasive. Shrivastav is chairperson of MSU's Department of Communicative Sciences and Disorders. Photo by G.L. Kohuth.

Presently there are no tried-and-true methods for diagnosing Parkinson’s. Shrivastav said if a person is showing early symptoms of the disease, which include tremors, slower movements or rigid muscles, he or she is given a drug to treat the disease.

“If the symptoms go away,” he said, “then it’s assumed you must have Parkinson’s disease.”

In more advanced cases, he said, symptoms are usually prominent enough that it is fairly easy to diagnose.

Parkinson’s disease is a neurological disorder affecting a half million people in the United States, with 50,000 newly diagnosed cases every year. It occurs when nerve cells in the brain stop producing a chemical called dopamine, which helps control muscle movement. Without dopamine, the nerve cells cannot properly send messages, leading to the loss of muscle function.

While there is no cure for Parkinson’s disease, early detection is particularly important since the treatments currently available for controlling symptoms are most effective at that stage.

Shrivastav and his colleagues from the University of Florida’s Department of Speech, Language and Hearing Sciences, recently presented their findings at the Acoustical Society of America Conference.