PASADENA, Calif. — NASA has selected a new mission, set to launch in 2016, that will take the first look into the deep interior of Mars to see why the Red Planet evolved so differently from Earth as one of our solar system’s rocky planets.

The new mission, named InSight, will place instruments on the Martian surface to investigate whether the core of Mars is solid or liquid like Earth’s, and why Mars’ crust is not divided into tectonic plates that drift like Earth’s. Detailed knowledge of the interior of Mars in comparison to Earth will help scientists understand better how terrestrial planets form and evolve.

“The exploration of Mars is a top priority for NASA, and the selection of InSight ensures we will continue to unlock the mysteries of the Red Planet and lay the groundwork for a future human mission there,” NASA Administrator Charles Bolden said. “The recent successful landing of the Curiosity rover has galvanized public interest in space exploration and today’s announcement makes clear there are more exciting Mars missions to come.”

InSight will be led by W. Bruce Banerdt at NASA’s Jet Propulsion Laboratory in Pasadena, Calif. InSight’s science team includes U.S. and international co-investigators from universities, industry and government agencies. The French space agency Centre National d’Etudes Spatiales, or CNES, and the German Aerospace Center are contributing instruments to InSight, which is scheduled to land on Mars in September 2016 to begin its two-year scientific mission. 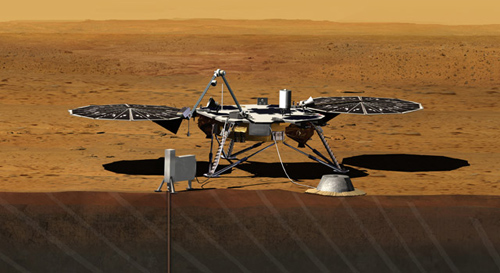 InSight is the 12th selection in NASA’s series of Discovery-class missions. Created in 1992, the Discovery Program sponsors frequent, cost-capped solar system exploration missions with highly focused scientific goals. NASA requested Discovery mission proposals in June 2010 and received 28. InSight was one of three proposed missions selected in May 2011 for funding to conduct preliminary design studies and analyses. The other two proposals were for missions to a comet and Saturn’s moon Titan.

InSight builds on spacecraft technology used in NASA’s highly successful Phoenix lander mission, which was launched to the Red Planet in 2007 and determined water existed near the surface in the Martian polar regions. By incorporating proven systems in the mission, the InSight team demonstrated that the mission concept was low-risk and could stay within the cost-constrained budget of Discovery missions. The cost of the mission, excluding the launch vehicle and related services, is capped at $425 million in 2010 dollars.

“Our Discovery Program enables scientists to use innovative approaches to answering fundamental questions about our solar system in the lowest cost mission category,” said John Grunsfeld, associate administrator for the Science Mission Directorate at NASA Headquarters. “InSight will get to the ‘core’ of the nature of the interior and structure of Mars, well below the observations we’ve been able to make from orbit or the surface.”

InSight will carry four instruments. JPL will provide an onboard geodetic instrument to determine the planet’s rotation axis and a robotic arm and two cameras used to deploy and monitor instruments on the Martian surface. CNES is leading an international consortium that is building an instrument to measure seismic waves traveling through the planet’s interior. The German Aerospace Center is building a subsurface heat probe to measure the flow of heat from the interior.

For more information about the Discovery Program, visit: https://discovery.nasa.gov .

For information about NASA and agency programs, visit: https://www.nasa.gov .