Lacking structured leadership, a single spokesperson and even a clear message, the Occupy movement has grown through the use of personal media and new technologies, sustained by participants’ own network of contacts and willingness to dive into the political fray, says a UCLA information studies professor who studies the different ways media and technology shape society and culture.

Throughout the life of the Occupy movement, dynamic social and technological factors have helped shape the character and effect of demonstrations and fueled the coverage the movement has received in the mainstream press. And Professor Leah A. Lievrouw sees the day-to-day use of mobile devices as a defining element of Occupy’s activism that has helped organizers gain momentum and support as well as ignite social, cultural and economic change. 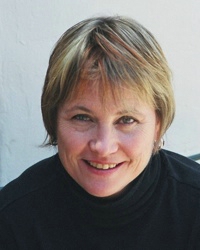 “One of the most striking things about the Occupy movement is the degree to which virtually every participant, every activist, is connected to other people in the movement and to the wider world via personal media,” said Lievrouw, who has written a new book, “Alternative and Activist New Media,” (Polity Press, 2011) that shows how counter-culture groups over the last three decades have made use of new media in novel ways.

“Mobile phones are everywhere at protest sites, especially smart phones with still and video cameras, audio recording and Internet access,” Lievrouw said. “At an Occupy L.A. march last fall, it seemed that only about half the people were carrying signs — but just about everyone was taking pictures, talking on the phone, checking GPS (Global Positioning System) maps or tweeting.”

A pervasive use of technology isn’t the only characteristic that has set the Occupy movement apart from social initiatives of the past; detractors have faulted the movement’s lack of clear organization and messaging and have pointed out that a more traditional — and proven — approach would better help catalyze deep and lasting change.

Lievrouw disagrees. “The people who object that the Occupy movement doesn’t have established leaders, a single clear message, set of demands or policy proposals are kind of missing the point,” she said.

“Researchers who have studied ‘new’ social movements since the 1970s and ’80s have found that they differ from classical movements like the labor or civil rights movements in some important ways. Those earlier movements had a clear, top-down leadership structure, where a few key individuals at the top — a ‘vanguard’ — would formulate policy, strategy and tactics and send instructions down the line to the rank and file, who carried out orders.”

That’s a hierarchical, mass production-style approach to organizing, she said, that seems more suited to a mass-media world with a few “senders” and legions of “receivers” or mass audiences. But media and social mobilization aren’t like that anymore.

Such alternative media, offering divergent and counter-cultural points of view, were largely marginalized and often struggled to survive. However, over the last several decades, the information studies specialist said, all of that has changed as networked media and information technologies have enabled new media entities to expand opportunities for outreach and communication, challenging the stability of traditional media while producing a swell of competition for audiences and users.

“People carry personalized media with them wherever they go and expect to contact each other, or send and receive messages from any point to any other point, anywhere, any time — it’s a constantly reorganizing network of people interacting with each other and with constantly changing information sources,” said Lievrouw. “People join new movements like Occupy not because of a single, unified or officially vetted message or demand, but because such movements resonate with people’s cultural worlds, ethical commitments, personal experiences and economic situations.”

People identify with the movement, and the movement is open to all kinds of perspectives and groups, she said. “That’s why ‘We are the 99%’ is kind of a perfect slogan for Occupy: People don’t join to follow orders, they participate because they want to interact and share experiences with others who have values and lives like theirs, who often feel that they have little or no control over the important economic and political decisions that affect them every day.”

But the proliferation of new media has also opened a Pandora’s Box of problems, she noted, including violations to privacy, security, political freedom and control, and other contentious issues.