New findings in breast cancer research by an international team of scientists contradict the prevailing belief that only basal-like cells with stem cell qualities can form invasive tumors. Research led by Ole William Petersen at the University of Copenhagen (CU) and Mina Bissell of the Lawrence Berkeley National Laboratory (Berkeley Lab) and has shown that luminal-like cells with no detectable stem cell qualities can generate larger tumors than their basal-like counterparts. This may hold important implications for the diagnosis and the treatment of breast cancer as well as future personalized cancer medicine.

“It is fashionable to think of breast cancer as a disease that can be treated if cancer stem cells are killed off, but we are reporting a sub-population of cancer cells that have no obvious stem cell properties and yet can be tumorigenic and highly aggressive,” Bissell says. “The existence of these additional sub-populations of tumorigenic cells tells us that the entire tumor needs to be eradicated, not just one sub-population of basal-like cells.”

Bissell is a leading authority on breast cancer and a Distinguished Scientist with Berkeley Lab’s Life Sciences Division. Petersen is a professor of Tissue Morphogenesis and Differentiation for CU’s Cellular and Molecular Medicine department and a principal investigator for the Danish Stem Cell Center. They are the corresponding authors of a paper in the Proceedings of the National Academy of Sciences that describes this work. The paper is titled “Tumor initiating but differentiated luminal-like breast cancer cells are highly invasive in the absence of basal-like activity.” Other co-authors were Jiyoung Kim, René Villadsen, Therese Sørlie, Louise Fogh, Signe Grønlund, Agla Fridriksdottir, Irene Kuhn, Fritz Rank, Vera Timmermans Wielenga, Hiroko Solvang, Paul Edwards, Anne-Lise Børresen-Dale and Lone Rønnov-Jessen. 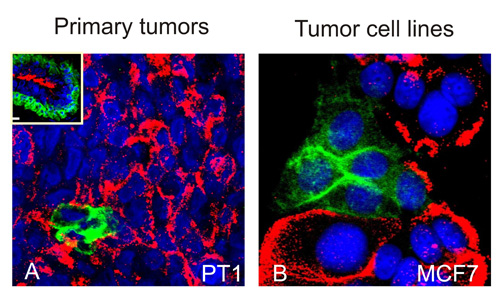 The Petersen-Bissell collaboration used milk mucin (MM) to mark luminal-like cells and CD271 to mark basal-like cells in primary tumors and tumor cell lines. The MM stain is red, the CD271 stain is green, and nuclei are stained blue. Inset in A shows staining of normal breast tissue for comparison. As shown, there is no overlap in staining between MM and CD271. Image credit: Berkeley Lab

“Our findings were a surprise to us as we had hypothesized the opposite scenario,” Petersen says. “We wanted to learn more about possible tumor suppressive properties so we set out to characterize the bulk of the tumor, which we assumed would not be tumor-initiating.”

Most breast cancers originate in the milk ducts and lobules, which consist of luminal cells surrounded by basal cells, and the two most frequent subtypes of human breast cancer cells are named luminal-like and basal-like after their resemblance to the two major lineages in the normal human breast. For the past several years, it has been widely believed that basal-like cells with the undifferentiated qualities of stem cells were the source of invasive tumors. However, since a majority of breast cancers exhibit luminal cell differentiation, the Petersen-Bissell collaboration investigated whether luminal-like differentiated cells within a basal-like cell hierarchy could also become tumorigenic, or must these luminal-like cells acquire basal-like traits to become malignant. 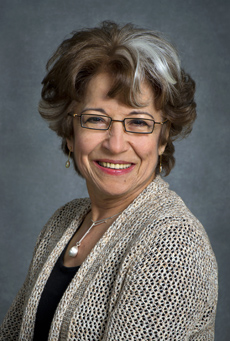 “We applied some rare and mutually exclusive lineage markers to isolate subsets of luminal-like and basal-like breast cancer cells, which enabled us to do single cell cloning with a reasonable success rate,” Petersen says. “We enriched for populations with or without prominent basal-like traits from individual tumors, and from single cell cloning of cell lines and recovered cells with a luminal-like phenotype.”

“Our findings demonstrate that basal-like cells, as defined currently, are not a requirement for breast tumor aggressiveness and that within a single tumor there are multiple cells with tumorigenic potential,” Bissell says. “This casts doubt on the current hypothesis of hierarchical or differentiative loss of tumorigenicity.”

The marker used by the Petersen-Bissell collaboration to isolate the luminal-like cancer cells was milk mucin (MM), one of the glycans, the sugar molecules that are ubiquitous to cell surfaces and central to cellular signaling. Basal-like cancer cells were marked with the protein CD271. The MM glycan was detected by the antibody M18. The CD271 marker was detected by the ME20.4 antibody.

In their investigation, the collaborators found that the ability of the luminal-like breast cancer cells to form large invasive tumors depended on the expression of the glycoprotein gene GCNT1, which in turn is required for the MM glycan to be detected by the M18 antibody. The collaborators believe this finding might be of potential clinical importance for breast cancer as co-author Kuhn, a member of Bissell’s research group, explains.

“There has been an increasing appreciation that glycans play an important role in malignant behavior and our work shows that inhibiting the activity of GCNT1 could prevent the invasive behavior of the aggressive luminal-like cancer cells if they express the MM epitope,” she says.

Although Petersen emphasizes that any clinical implications of this work remains speculative at this time, the finding that multiple types of cells in breast cancers are capable of initiating invasive tumors, he says, could hold implications for future personalized medicine. 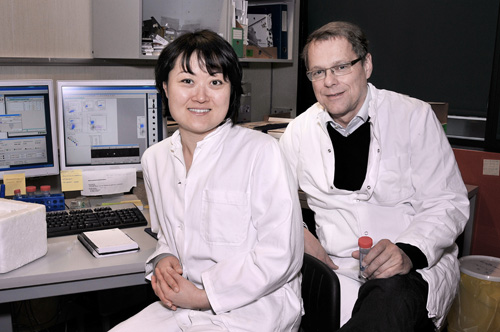 Jiyoung Kim and Ole Petersen at the University of Copenhagen were part of an international team that found that luminal-like cells with no detectable stem cell qualities can generate larger breast cancer tumors than their basal-like counterparts. Image credit: Berkeley Lab

“While new avenues in breast cancer targeting have been strongly influenced by the concepts of tumor subtypes and cancer stem cells, we believe our data and recent data from other laboratories opens the possibility of targeting individual stages of differentiation of breast cancer cells within a tumor,” Petersen says. “In that way personalized medicine in the future could rely on a cellular-composition-profile with each cellular component accounted for in the treatment design.”