Metamaterials – artificial nanostructures engineered with electromagnetic properties not found in nature – offer tantalizing future prospects such as high resolution optical microscopes and superfast optical computers. To realize the vast potential of metamaterials, however, scientists will need to hone their understanding of the fundamental physics behind them. This will require accurately predicting nonlinear optical properties – meaning that interaction with light changes a material’s properties, for example, light emerges from the material with a different frequency than when it entered. Help has arrived. 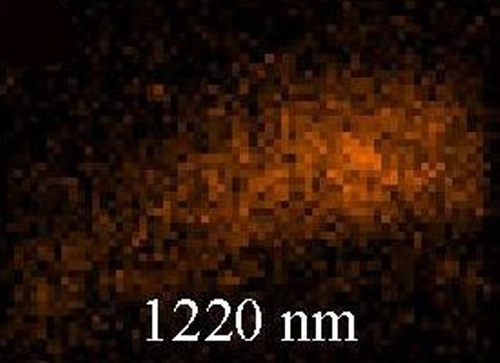 Confocal microscopy confirmed that the nonlinear optical properties of metamaterials can be predicted using a theory about light passing through nanostructures. Image credit: Berkeley Lab

Scientists with the U.S. Department of Energy (DOE)’s Lawrence Berkeley National Laboratory (Berkeley Lab) and the University of California (UC) Berkeley have shown, using a recent theory for nonlinear light scattering when light passes through nanostructures, that it is possible to predict the nonlinear optical properties of metamaterials.

“The key question has been whether one can determine the nonlinear behavior of metamaterials from their exotic linear behavior,” says Xiang Zhang, director of Berkeley Lab’s Materials Sciences Division and an international authority on metamaterial engineering who led this study. “We’ve shown that the relative nonlinear susceptibility of large classes of metamaterials can be predicted using a comprehensive nonlinear scattering theory. This will allow us to efficiently design metamaterials with strong nonlinearity for important applications such as coherent Raman sensing, entangled photon generation and frequency conversion.” 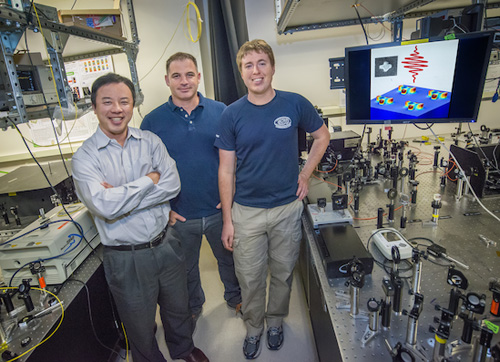 Xiang Zhang, Haim Suchowski and Kevin O’Brien were part of the team that discovered a way to predict thenon-linear optical properties of metamaterials. (Photo by Roy Kaltschmidt)

Zhang, who holds the Ernest S. Kuh Endowed Chair at UC Berkeley and is a member of the Kavli Energy NanoSciences Institute at Berkeley (Kavli ENSI), is the corresponding author of a paper describing this research in the journal Nature Materials. The paper is titled “Predicting nonlinear properties of metamaterials from the linear response.” The other authors are Kevin O’Brien, Haim Suchowski, Junsuk Rho, Alessandro Salandrino, Boubacar Kante and Xiaobo Yin.

The unique electromagnetic properties of metamaterials stem from their physical structure rather than their chemical composition. This structure, for example, provides certain metamaterials with a negative refractive index, an optical property in which the phase front of light moving through a material propagates backward towards the source. The phase front light moving through natural materials always propagates forward, away from its source.

Metamaterial arrays whose geometry varied gradually from a symmetric bar to an asymmetric U-shape were used to compare the predictive abilities of Miller’s rule and a non-linear light scattering theory. Image credit: Berkeley Lab

Zhang and his group have already exploited the linear optical properties of metamaterials to create the world’s first optical invisibility cloak and mimic black holes. Most recently they used a nonlinear metamaterial with a refractive index of zero to generate “phase mismatch–free nonlinear light,” meaning light waves moved through the material gaining strength in all directions. However, engineering nonlinear metamaterials remains in its infancy, with no general conclusion on the relationship between linear and nonlinear properties.

For the past several decades, scientists have estimated the nonlinear optical properties in natural crystals using a formulation known as “Miller’s rule,” for the physicist Robert Miller who authored it. In this new study, Zhang and his group found that Miller’s rule doesn’t work for a number of metamaterials. That’s the bad news. The good news is that a nonlinear light scattering theory, developed for nanostructures by Dutch scientist Sylvie Roke, does.

“From the linear properties, one calculates the nonlinear polarization and the mode of the nanostructure at the second harmonic,” says Kevin O’Brien, co-lead author of the Nature Materials paper and a member of Zhang’s research group. “We found the nonlinear emission is proportional to the overlap integral between these, not simply determined by their linear response.”

Zhang, O’Brien, Suchowski, and the other contributors to this study evaluated Miller’s rule and the nonlinear light scattering theory by comparing their predictions to experimental results obtained using a nonlinear stage-scanning confocal microscope.

“Nonlinear stage-scanning confocal microscopy is critical because it allows us to rapidly measure the nonlinear emission from thousands of different nanostructures while minimizing the potential systematic errors, such as intensity or beam pointing variations, often associated with tuning the wavelength of an ultrafast laser,” O’Brien says.

The researchers used confocal microscopy to observe the second harmonic generation from metamaterial arrays whose geometry was gradually shifted from a symmetric bar-shape to an asymmetric U-shape. Second harmonic light is a nonlinear optical property in which photons with the same frequency interact with a nonlinear material to produce new photons at twice the energy and half the wavelength of the originals. It was the discovery of optical second harmonic generation in 1961 that started modern nonlinear optics.

“Our results show that nonlinear scattering theory can be a valuable tool in the design of nonlinear metamaterials not only for second-order but also higher order nonlinear optical responses over a broad range of wavelengths,” O’Brien says. “We’re now using these experimental and theoretical techniques to explore other nonlinear processes in metamaterials, such as parametric amplification and entangled photon generation.”