Scientists from the Department of Energy’s Lawrence Berkeley National Laboratory (Berkeley Lab) have gained more insights into why older women are more susceptible to breast cancer. They found that as women age, the cells responsible for maintaining healthy breast tissue stop responding to their immediate surroundings, including mechanical cues that should prompt them to suppress nearby tumors.

Their work sheds light on how aging alters cellular and molecular functions, and how these changes contribute to the prevalence of breast cancer in older women. The disease is most frequently diagnosed among women aged 55 to 64, according to the National Cancer Institute.

The research appears online June 5 in the journal Cell Reports. It was led by Mark LaBarge of Berkeley Lab’s Life Sciences Division, with help from first author Fanny Pelissier and other Berkeley Lab scientists, and researchers from UC Berkeley and Norway’s University of Bergen. 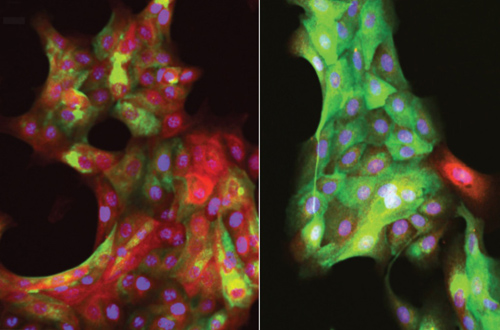 These fluorescent images of human mammary epithelial cells show the effects of aging. In the left image, multipotent progenitor cells from a 19-year-old young woman respond to a tumor-mimicking stiff surface by differentiating into red-colored tumor-suppressing myoepithelial cells. In the right image, progenitor cells from a 66-year-old woman fail to launch this putative cancer-fighting response when exposed to a stiff surface. (Image credit: Pelissier/LaBarge)

The scientists studied multipotent progenitors, a type of adult stem cell that is believed to be the origin of many breast cancers. Two years ago, LaBarge’s group found that as women age, multipotent progenitors accumulate in breast epithelial tissue. They didn’t know why these cells increase in numbers, but they believed their cellular microenvironment—or the matrix of tissue surrounding them—plays a role.

To explore this idea, the scientists examined human mammary epithelial cell samples from pre and post-menopausal women. They wanted to learn how the multipotent progenitors in these tissue samples are affected by tiny changes to their microenvironments. They placed the tissue on soft polymer surfaces that mimic healthy breast tissue, as well as on progressively stiffer polymer surfaces that mimic the rigidity of a tumor.

They found that multipotent progenitors in tissue from women less than 30 years old are extremely responsive to changes to their immediate surroundings. When tissue from young women was placed on a soft polymer, multipotent progenitors differentiated into milk-producing luminal cells. When the tissue was placed on a stiff polymer, the cells reduced the production of luminal cells and ramped up the production of tumor-fighting myoepithelial cells.

“We think this is a defense mechanism. The epithelia tissue recognizes that stiffness isn’t good and produces tumor suppressants,” says LaBarge. 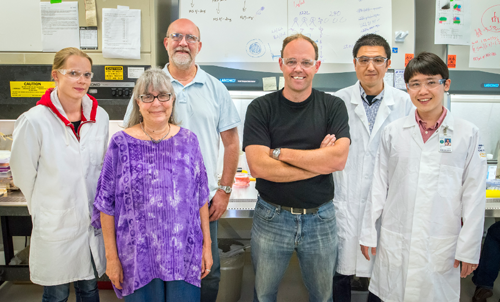 But this defense wasn’t observed in tissue from women older than 55. Instead of responding to a stiff polymer by upping the production of tumor-suppressing cells, multipotent progenitors from older women produced equal amounts of luminal and tumor-suppressing cells. They also made more of themselves. That’s bad for a couple of reasons. The majority of cancers diagnosed in older women are luminal, and more multipotent progenitors means more cells that can become cancerous.

“We found that as women age, multipotent progenitors, which are the cells responsible for maintaining healthy homeostasis in breast tissue, no longer respond to their microenvironment like they do in younger women,” says LaBarge.

“Our work shows that one reason for this is that multipotent progenitors in older tissue do not correctly perceive differentiation cues, such as the mechanical stiffness of their surroundings,” he adds.

The scientists traced this failure to a breakdown in a cellular process. The process converts external mechanical cues, in this case the stiffness of the tissue outside of the cell membrane, into an internal molecular message that tells the cell nucleus what to do. In multipotent progenitors in women older than 55, the molecules that help deliver this message are inefficiently activated, the scientists found.

They believe this breakdown stems from changes in the way women’s genes are activated and silenced as they grow older.

Their functional analysis of multipotent progenitors was made possible by the work of co-author and Berkeley Lab scientist Martha Stampfer, who curated a large collection of breast tissue samples about 30 years ago. The specimens enabled the scientists to create a wide range of normal human mammary epithelial cell strains from women aged 16 to 91 years.

The research was supported by the National Institutes of Health.