It’s a powerful feeling, says anthropology graduate student Amanda Taylor, to stand where people stood thousands of years back and gaze out at the same water — the same sunsets — that they saw so long ago.

“Maybe you reach down and see an artifact, and they last dropped that artifact a thousand years ago,” she said. “No one has looked at it or touched it, or even thought about it. And when you pick it up and look at it, it’s like you have this instant connection to the person who left it there.”

Taylor is co-editor, with Burke Museum Director Julie Stein, of a new book from University of Washington Press titled “Is it a House?” The book details archaeological excavations at English Camp, on San Juan Island facing the Gulf of Georgia, conducted by Stein and her students over many years. 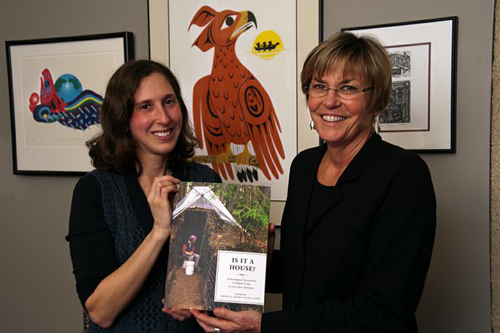 Amanda Taylor, left, and Julie Stein, co-editors of "Is it a House?" Stein said, "Every single thing you turn over is a little charge. People always say what’s the coolest thign you’ve found? Everything I find is the coolest thing I find!". Image credit: Mary Levin

Stein, a UW professor of anthropology, says it took Taylor’s energy and efficiency to prompt her to finish this volume about research conducted in 1990 and 1991. Stein published her first set of findings, about one part of the site, in 1992. Another part, with horseshoe-shaped topographical ridges, is the subject of this work. Stein said in all the site “is about three football fields long, and we only excavated one little part.” 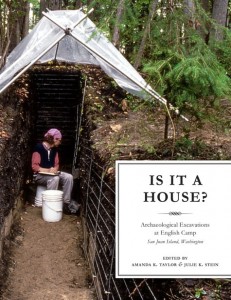 The site is in San Juan Island National Historical Park, which made it an attractive site. “A private individual may not want 20 undergraduates coming to their back and front yard for eight weeks, for so many years in a row,” she said, but the National Park Service did.

The site had been the subject of research in the 1950s that focused mainly on studying the use of tools, Stein said. She and her students investigated shell middens, or heaps of shell, artifacts, ash, sediment and other traces of past inhabitants. They were looking for patterns indicating the location of possible walls and other potential remnants of a house structure, and hoping to learn to more about the residents’ diet. People ate fish, shellfish, deer, elk, birds and plants.

“What we were trying to figure out are the more nuanced questions,” she said. “’What kind of shells?’ ‘Did they change the kinds of shells? Where was the shoreline? How did they collect the birds — was it a seasonal occupation? Where was the house? Was there a house?”

“It was really satisfying to actually look at every single kind of materials type — bones and stones and dirt — and take all the puzzle pieces together,” Taylor said. “And maybe you don’t actually have every single puzzle piece, but you have a picture.”

It will spoil no surprise to reveal that their answer to the title question is a somewhat qualified “yes.” The evidence from many researchers indicates the site was indeed a home or domestic gathering area of some sort.

“You can walk inside of the ridge and look up around, and it’s really quiet — and you can’t see around it, and you kind of feel you are in a structure,” Taylor said.

Stein said more evidence was that artifacts found in front of the horseshoe shape differed from those inside the berm. “Those differences indicate that there were some kind of barriers, such as walls, that were keeping people doing one thing on one side of these walls and another thing on the other side.”

Few of the individual research reports came to the outright conclusion that it was a house, Stein said. “But when taken as a whole, it was so suggestive, we felt we could say it was a house.”

Taylor noted that it may not have been a single family home “the way we think about a house. Maybe more of a community space.”

The two would never claim they alone have the final answers about this or any project. Each excavation makes its own contribution to the ongoing work. “Archaeology is a very cumulative science,” Stein said.

Despite all the scholarly research, these researchers retain a certain sense of wonder about the past. “Every archaeologist has a romantic side,” Stein said.

“You sit there in the evening around the campfire, and it’s a logical thing to talk about, in the early morning hours, where it’s kind of misty or raining.”

Ending in little more than a whisper, she said, “You take the plastic off the unit and you start to excavate, and inevitably, the students will say, ‘What do you think happened here?’”