Coyotes “Shrank,” Wolves Did Not, After Last Ice Age and Megafaunal Extinctions

*Once large and wolf-like, coyotes ultimately became much smaller*

When the last ice age ended more than 10,000 years ago, many large species of mammals went extinct and others underwent changes in appearance.

But what caused evolutionary changes to take place in the mammals that remained alive?

A study by Julie Meachen of the National Science Foundation (NSF) National Evolutionary Synthesis Center and Josh Samuels of the John Day Fossil Beds National Monument reveals that gray wolves and coyotes, once more similar in size, took the extinction in different strides.

Coyotes changed from large, pack-hunting dogs to the smaller canines we know today and wolves essentially remained the same. Changes in body size occurred for coyotes because large prey and their large competitors were disappearing, the researchers find.

The journal Proceedings of the National Academy of Sciences published the results this week. 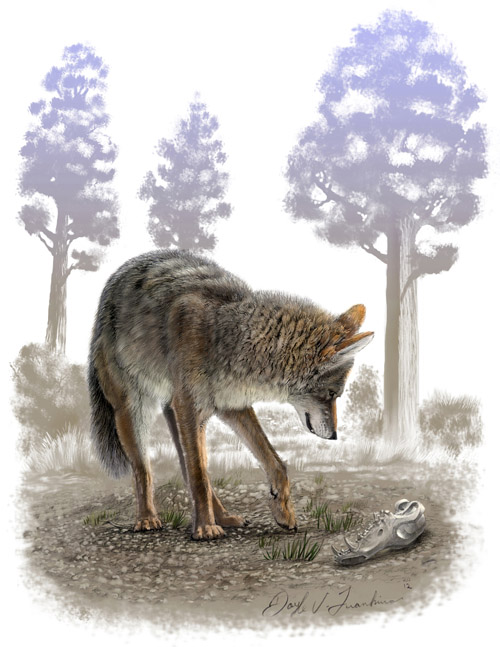 Meachen and Samuels began searching for the answer for these changes in appearance by looking at an ecogeographic principle called Bergmann’s rule, which states that as climate gets colder, or as one moves farther away from the equator, animals get bigger.

Surprisingly, however, coyotes don’t show a correlation between climate and body size. The researchers then took another approach. They hypothesized that perhaps species interactions, or lack thereof, caused the shift.

To find out if this could be the case, the scientists examined body size in living coyotes across different climates from North Dakota to southern California.

They also measured the skeletons of wolves (Canis lupus) and coyotes (Canis latrans) from Pleistocene-aged tar deposits, as well as of early, mid-, and recent Holocene (end of the Pleistocene to the present) populations of both.

They found few differences between Pleistocene and Holocene wolf populations. 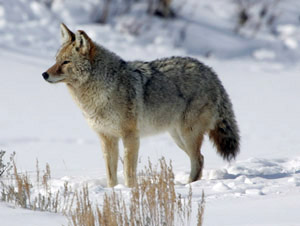 Coyotes in the Pleistocene (Canis latrans orcutti) were distinct from existing coyotes, however. The skulls and jaws of C. l. orcutti were significantly thicker and deeper than those of recent populations.

These characteristics suggest that C. l. orcutti was more carnivorous than modern coyotes. 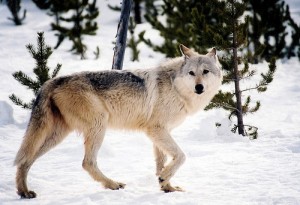 Gray wolf of modern times; compared with the coyote, it's kept its size across the millennia. Image credit: U.S. National Park Service

“In a time of increasing loss of biodiversity, understanding the degree to which species interactions drive evolutionary change is important,” says Saran Twombly, program director in NSF’s Division of Environmental Biology, which supported the research.

“This study provides evidence that interactions among carnivores and their prey are the probable cause of evolutionary change in coyotes.”

Wolves are large-prey specialists that hunt in packs by means of a long, enduring chase. In contrast, coyotes are usually solitary predators of small mammals, such as rodents and rabbits. 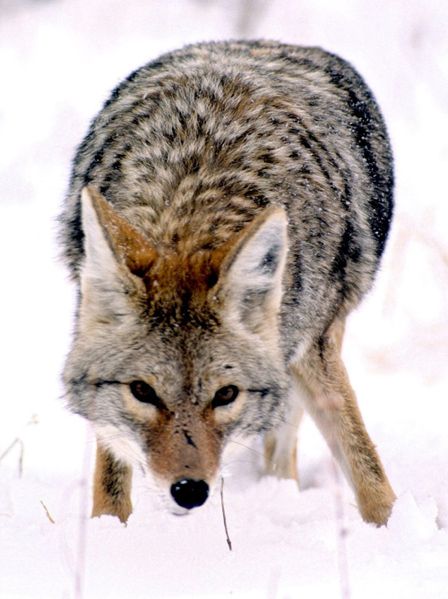 Coyote on-the-hunt: for smaller prey than its kin of past ages once stalked. Image credit: U.S. National Park Service

Yet coyotes can be opportunistic hunters with changing prey-killing behaviors because of their intermediate size and adaptability. Some of these behaviors would bring them into direct competition for food with wolves.

“These species interactions are likely what caused the shift in coyote morphology we see in the fossil record–and into today.”

The results are interesting for two reasons, says Meachen.

In a relatively short time span, there’s been a significant change in the body size and shape of a large mammal species. 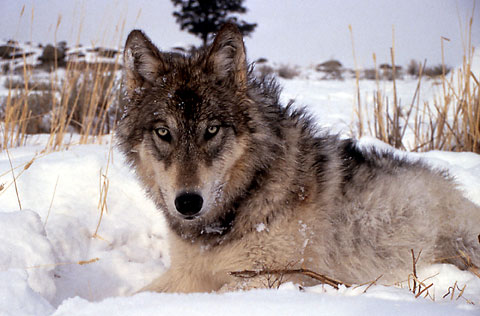 “Although we can’t pinpoint the exact cause of the change in coyotes, we can show that it is not being directly caused by climate. The most likely explanation is interactions among species.”