James Wellman, associate professor of American religion in the Jackson School of International Studies, is the author of the book “Rob Bell and a New American Christianity.” He answered a few questions about his book for UW Today.

Q. What’s the basic concept behind this book?

A. “Rob Bell is a fascinating character in part because he achieved his evangelical celebrity so quickly, starting a church in Grand Rapids, Mich., and in a year and a half attracting 10,000 people to the church. He also created new media, the Nooma videos, which are unique and powerful meditative pieces on critical issues of faith. In 2011, he was named, by Time Magazine, one of the 100 most influential people in the world. That same year, he had a best seller, Love Wins, in which he asked pointed questions about the existence of hell, which made his conservative readers very uncomfortable.”

Q. What is the general structure of the book? 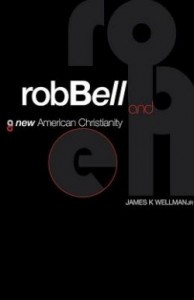 “Rob Bell and a New American Christianity” was published in November 2012 by Abingdon Press. Image credit: University of Washington

A. “I tell the story of what makes him tick, and how his powerful charisma is generated, and what he did with it.

It’s a remarkable story precisely because he went against several conventions of the evangelical type. He criticized the Iraq War; he did not remodel or build a new cathedral; he moved his family into a Grand Rapids ghetto; he changed in his interpretation of scripture and was unafraid to voice these changes. Bell not only changed, but learned about his faith and shared those new insights.”

Q. How does Bell succeed in attracting young people to Mars Hill?

A. Wellman said Bell is “first and foremost a performer” who felt the church had lost the “beauty, goodness, energy, love, passion and joy” that first attracted him, so he tried to make the church “so good, so rich, so powerful that people couldn’t help but want to come and enjoy it.”

Bell is an excellent preacher, Wellman said. “I know what makes a good sermon. I listened to nearly 100 of Bell’s sermons, and found few clunkers in the batch. In fact, it was not only a great performance but also a very good exegesis of the Bible. Indeed, he made me fall in love with the Bible again, which I was surprised by. And these sermons, for the most part, were 45 minutes long. Bell knows how to frame a point, and make the listener want to listen.”

Wellman noted, however, that Bell’s church is not related to the Seattle Mars Hill Church or Mark Driscoll’s ministry.

Q. You write that Bell’s gospel message is different from most evangelicals. In what ways?

A. “I think, for Bell, the ‘truth’ of the faith only becomes ‘true’ in action. That is, as Bell is fond of saying, the point of Christian faith is not ‘to turn the flesh into word, but to make the word flesh.’”

Wellman said the temptation is to create dogma and doctrines and then argue over who is right, a debate Bell does not join. “It recalls the prophetic call to act out the faith on behalf of the widow and orphan. So, is this really new? Not really, but it is a refreshing corrective to the way many Christians spend their time telling each other that they’re wrong.”

Q. What does Bell’s move to Hollywood say about his goals and how he intends to achieve them?

A. “This is really up in the air. I think he felt an intense call to try to do something new. It is an invitation that he frequently made to his congregation, that they should follow their dreams and take risks doing it. The risk, for Bell, has not necessarily paid off yet. He has no TV show, yet.. One of the reasons I respect him is that he follows through on his dreams; he takes risks. He doesn’t just do the same thing over and over again. But the thing about risks is that they are risky; you may fail. He is willing to go there, and I say, bravo.”

Q. What would you like the reader to take away from your book?

A. “I would like them to enjoy the ride of the book. A lot of folks have said to me that they can’t put the book down. I think it’s a great story of an interesting individual trying to work out his salvation with creativity and passion. I think it gives people a chance to think about their own spiritual journey, and all the ways it can be filled with wonder, ecstasy and love.”

What do you expect, or hope for, from Bell in the future?

A. “As I’ve said, I hope he surprises us all. I hope he shows his critics that their harsh judgments were premature. I am excited to see what he does next.”