Researchers at Yale School of Medicine have zeroed in on a set of neurons in the part of the brain that controls hunger, and found that these neurons are not only associated with overeating, but also linked to non-food associated behaviors, like novelty-seeking and drug addiction.

Published in the June 24 online issue of Nature Neuroscience, the study was led by Marcelo O. Dietrich, postdoctoral associate, and Tamas L. Horvath, the Jean and David W. Wallace Professor of Biomedical Research and chair of comparative medicine at Yale School of Medicine.

In attempts to develop treatments for metabolic disorders such as obesity and diabetes, researchers have paid increasing attention to the brain’s reward circuits located in the midbrain, with the notion that in these patients, food may become a type of “drug of abuse” similar to cocaine. Dietrich notes, however, that this study flips the common wisdom on its head.

Horvath and his team studied two sets of transgenic mice. In one set, they knocked out a signaling molecule that controls hunger-promoting neurons in the hypothalamus. In the other set, they interfered with the same neurons by eliminating them selectively during development using diphtheria toxin. The mice were given various non-invasive tests that measured how they respond to novelty, and anxiety, and how they react to cocaine. 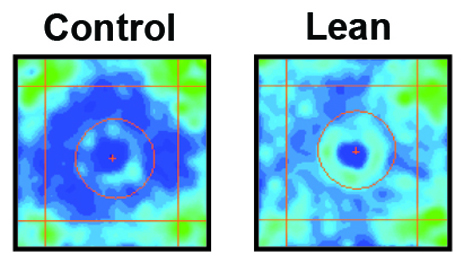 A lean animal and a control were both exposed to a novelty item (center). The lean animal spent more time exploring the novelty, as shown by the higher concentration of yellow in the slide. Image credit: Yale University

“We found that animals that have less interest in food are more interested in novelty-seeking behaviors and drugs like cocaine,” said Horvath. “This suggests that there may be individuals with increased drive of the reward circuitry, but who are still lean. This is a complex trait that arises from the activity of the basic feeding circuits during development, which then impacts the adult response to drugs and novelty in the environment.”

Horvath and his team argue that the hypothalamus, which controls vital functions such as body temperature, hunger, thirst fatigue and sleep, is key to the development of higher brain functions. “These hunger-promoting neurons are critically important during development to establish the set point of higher brain functions, and their impaired function may be the underlying cause for altered motivated and cognitive behaviors,” he said.

“There is this contemporary view that obesity is associated with the increased drive of the reward circuitry,” Horvath added. “But here, we provide a contrasting view: that the reward aspect can be very high, but subjects can still be very lean. At the same time, it indicates that a set of people who have no interest in food, might be more prone to drug addiction.”