Ryan Zurakowski, assistant professor of electrical and computer engineering at the University of Delaware, is co-author of a paper appearing in Nature Medicine on Jan. 12 highlighting the role of T-cells in HIV.

The paper, titled “HIV-1 Persistence in CD4+ T-Cells with Stem Cell-Like Properties,” provides evidence that a particular T-cell type may help researchers better understand why HIV can persist despite treatment.

T-cells are a type of lymphocyte, or white blood cell, produced by the thymus gland, that actively participates in the body’s immune response. “Memory” T-cells can live for years, or even decades, providing life-long immunity to previously encountered diseases. They can form “quiescent” infections, which last for years, and cause HIV to rebound whenever a patient stops treatment. 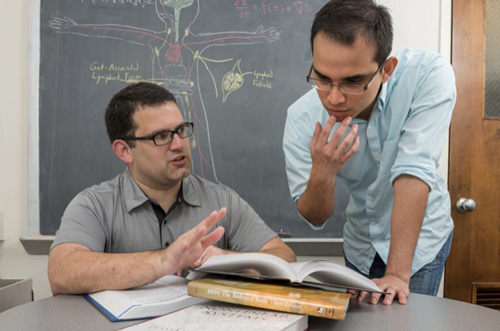 Ryan Zurakowski (left), shown with doctoral student Fabian Cardozo, is co-author of a paper appearing in Nature Medicine highlighting the role of T-cells in HIV. Photo by Kathy F. Atkinson

During a decade-long study, the researchers discovered that not all memory T-cells are alike. A subgroup of memory T-cells, called “Stem-Cell Memory T-cells” (Tscm), are different, particularly in their ability to produce daughter cells.

This finding is significant, Zurakowski said, because it demonstrates that Tscm cells are the slowest-decaying portion of the HIV reservoir.

“Over time this particular cell type plays an increasingly significant role in sustaining HIV infection in patients that have remained on therapy,” he said.

Zurakowski credits the finding to the diligence of Lichterfeld and the researchers at the Ragon Institute in carefully following the same HIV patients for a decade.

“Because the researchers have followed the same patients over a decade, we have created a high fidelity data set that would not otherwise have been possible,” he said.

Drugs currently being developed for cancer therapy that target stem-cell metabolic pathways may be able to target this cell type as well, due to the “stem-cell like” nature of the Tscm cells, he continued.

A better understanding of how the HIV virus leverages a cell’s stem cell-like properties of cellular immune memory to stay alive could lead to improved clinical strategies for HIV treatment.

“If we can find a way to selectively eliminate the HIV-infected Tscm cells, it will be a major step in developing a true ‘cure’ for HIV infection,” concluded Zurakowski.

Ryan Zurakowski joined UD in 2006. In addition to his faculty role in electrical and computer engineering, he is also affiliated with the Delaware Biotechnology Institute and holds appointments within the Department of Mathematical Sciences and the biomedical engineering program. His research centers on nonlinear control theory and applications, specifically in mathematical biology and medicine.

Zurakowski’s previous work includes developing a treatment method to reduce the risk of future failures in patients who have already experienced failure with their HIV treatment protocol. He also led work, reported in the Journal of the Royal Society Interface, on new evidence that hidden HIV virus replication may be occurring within the body’s tissue, despite undetectable virus levels in the blood.

The research reported in this paper was funded by the American Foundation for AIDS Research and the U.S. National Institutes of Health, the Mark and Lisa Schwartz Foundation and by the Bill and Melinda Gates Foundation, among others.