PASADENA, Calif. — NASA’s Dawn spacecraft on Saturday became the first probe ever to enter orbit around an object in the main asteroid belt between Mars and Jupiter.

Dawn will study the asteroid, named Vesta, for a year before departing for a second destination, a dwarf planet named Ceres, in July 2012. Observations will provide unprecedented data to help scientists understand the earliest chapter of our solar system. The data also will help pave the way for future human space missions.

“Today, we celebrate an incredible exploration milestone as a spacecraft enters orbit around an object in the main asteroid belt for the first time,” NASA Administrator Charles Bolden said. “Dawn’s study of the asteroid Vesta marks a major scientific accomplishment and also points the way to the future destinations where people will travel in the coming years. President Obama has directed NASA to send astronauts to an asteroid by 2025, and Dawn is gathering crucial data that will inform that mission.” 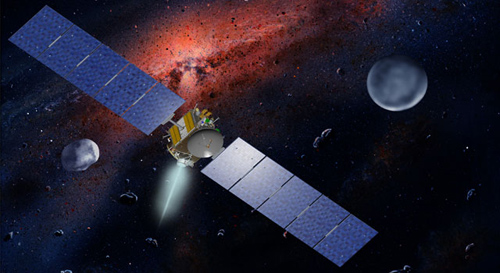 The spacecraft relayed information to confirm it entered Vesta’s orbit, but the precise time this milestone occurred is unknown at this time. The time of Dawn’s capture depended on Vesta’s mass and gravity, which only has been estimated until now. The asteroid’s mass determines the strength of its gravitational pull. If Vesta is more massive, its gravity is stronger, meaning it pulled Dawn into orbit sooner. If the asteroid is less massive, its gravity is weaker and it would have taken the spacecraft longer to achieve orbit. With Dawn now in orbit, the science team can take more accurate measurements of Vesta’s gravity and gather more accurate timeline information.

Dawn, which launched in September 2007, is on track to become the first spacecraft to orbit two solar system destinations beyond Earth. The mission to Vesta and Ceres is managed by NASA’s Jet Propulsion Laboratory in Pasadena, Calif., for the agency’s Science Mission Directorate in Washington. Dawn is a project of the directorate’s Discovery Program, which is managed by NASA’s Marshall Space Flight Center in Huntsville, Ala.

The University of California, Los Angeles, is responsible for the overall Dawn mission science. Orbital Sciences Corp. of Dulles, Va., designed and built the spacecraft. The German Aerospace Center, the Max Planck Institute for Solar System Research, the Italian Space Agency and the Italian National Astrophysical Institute are part of the mission’s team. JPL is a division of the California Institute of Technology in Pasadena.

For information about the Dawn mission, visit: https://www.nasa.gov/dawn and https://dawn.jpl.nasa.gov