UAVSAR uses a technique called interferometry that sends pulses of microwave energy from the sensor on the aircraft to the ground to detect and measure very subtle deformations in Earth’s surface. 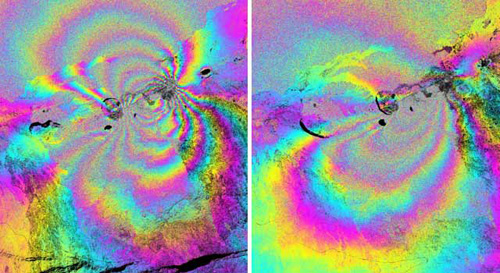 Color-enhanced UAVSAR interferogram images of Hawaii's Kilauea volcano, taken between January 2010 and May 2011. The images show the east rift zone of Kilauea, about 6 miles (9.7 kilometers) from the summit caldera. Lava has been flowing from the east rift zone, the most active part of Kilauea, since 1983. Image credit: NASA/JPL-Caltech

The radar will collect data over Kilauea from an altitude of about 41,000 feet (12,500 meters). UAVSAR previously studied the region in January 2010 and May 2011. Those two sets of observations successfully imaged the surface deformation caused by the March 2011 fissure eruption in Kilauea’s east rift zone.

Flights this month will trace the same path as the two previous years to measure deformation of the volcano since the March 2011 eruption and as part of future studies of the volcano’s changing deformation patterns due to volcanic activity.