Decades of wild swings in crab populations – some natural, some human-caused – dramatize the myriad issues surrounding questions about sustainable fisheries and the ecosystems that support them.

So said David Armstrong, professor and director of aquatic and fishery sciences, in his Jan. 5 talk “Claws, causes, climate and corps: A cavalcade of true crab sagas.”

“Sustainability in these cases doesn’t mean constancy,” Armstrong said. “In the face of such wide swings in abundance caused by many natural factors, managers need to ensure overfishing will not occur by lowering harvest when needed. ‘Sustainability’ is more about viable harvests that will not adversely affect the population’s ability to reproduce long-term, than it is some sort of guarantee of a constant amount.” 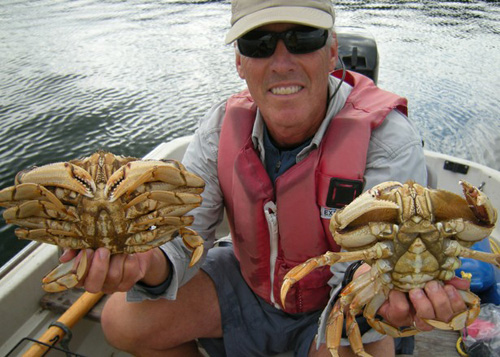 Armstrong’s talk was the first in the annual Bevan’s Series on Sustainable Fisheries. Lectures, which are free and open to the public, are each Thursday through March 8, 4:30 p.m., in the auditorium in Fisheries Sciences. This year’s theme: Where sustainability meets reality.

While most U.S. crab fisheries are seemingly managed in a conservative fashion based on harvesting surplus males, Armstrong said, there remain great challenges for management given the complex ways crabs develop and reproduce and changes in their habitat.

And then there are reoccurring instances of human perturbations that range from habitat destruction to well-meaning mitigation attempts to overfishing.

Armstrong described one human-caused change 140 years ago that unintentionally resulted in a boon for Dungeness crab in Washington state that continues even today. Dungeness crabs are one of the Pacific Northwest’s most profitable fisheries with coastal estuaries in Washington and Oregon providing essential nursery habitat.

In the 1880s, sea captains introduced the non-native soft-shell Mya clam into Willapa Bay and Grays Harbor estuaries. The clams flourished a few years and then died out in the 1890s leaving behind piles of empty clam shells across thousands of acres of tide flats. Those so-called “death assemblages” in turn became clam-shell condos providing additional refuge from predators when Dungeness crab are only about a quarter inch to a half inch in size.

If it worked once, why not a second time, reasoned the Army Corps of Engineers in recent years. The corps was eager to mitigate the loss of juvenile Dungeness crab caused by extensive dredging to keep shipping channels clear in Grays Harbor.

Except this time tons of Pacific oyster shell were artificially added to tidelands. Although conceptually a good idea, Armstrong said, the reality was that the new shell habitat was overrun by another species of crab that crowded out the Dungeness and the piles of shells began sinking as sediments were undermined by burrowing ghost shrimp.

It’s just another example of the wide array of top-down and bottom-up drivers that determine how many Dungeness crab live to the age when they can reproduce and be harvested, Armstrong said.

The speaker Jan. 12 looks at recreational fishing that, in more prosperous countries, dominates the catch wild freshwater fish stocks, and many coastal ones, thereby generating a number of sustainability issues.