An afternoon whirlwind on Mars lofts a twisting column of dust more than half a mile (800 meters) high in an image from the High Resolution Imaging Science Experiment (HiRISE) camera on NASA’s Mars Reconnaissance Orbiter.

HiRISE captured the image on Feb. 16, 2012, while the orbiter passed over the Amazonis Planitia region of northern Mars. In the area observed, paths of many previous whirlwinds, or dust devils, are visible as streaks on the dusty surface.

The active dust devil displays a delicate arc produced by a westerly breeze partway up its height. The dust plume is about 30 yards or meters in diameter. 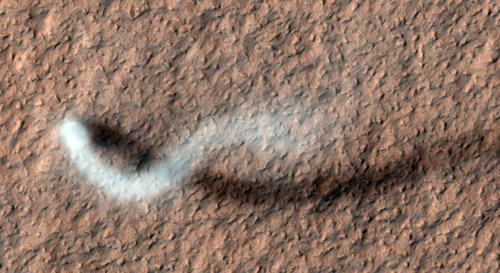 The image was taken during the time of Martian year when that planet is farthest from the sun. Just as on Earth, winds on Mars are powered by solar heating. Exposure to the sun’s rays declines during this season, yet even now, dust devils act relentlessly to clean the surface of freshly deposited dust, a little at a time.

Dust devils occur on Earth as well as on Mars. They are spinning columns of air, made visible by the dust they pull off the ground. Unlike a tornado, a dust devil typically forms on a clear day when the ground is heated by the sun, warming the air just above the ground. As heated air near the surface rises quickly through a small pocket of cooler air above it, the air may begin to rotate, if conditions are just right.

The Mars Reconnaissance Orbiter has been examining Mars with six science instruments since 2006. Now in an extended mission, the orbiter continues to provide insights into the planet’s ancient environments and how processes such as wind, meteorite impacts and seasonal frosts continue to affect the Martian surface today. This mission has returned more data about Mars than all other orbital and surface missions combined.

More than 21,700 images taken by HiRISE are available for viewing on the instrument team’s website: https://hirise.lpl.arizona.edu . Each observation by this telescopic camera covers several square miles, or square kilometers, and can reveal features as small as a desk.

HiRISE is operated by the University of Arizona, Tucson. The instrument was built by Ball Aerospace & Technologies Corp., Boulder, Colo. The Mars Reconnaissance Orbiter Project and the Mars Exploration Rover Project are managed by the Jet Propulsion Laboratory, Pasadena, Calif., for NASA’s Science Mission Directorate, Washington. JPL is a division of the California Institute of Technology, also in Pasadena. Lockheed Martin Space Systems, Denver, built the orbiter. For more about the Mars Reconnaissance Orbiter, see www.nasa.gov/mro.