Using nanoparticles, Yale researchers have developed a drug-delivery system that could reduce organ transplant complications by hiding the donated tissue from the recipient’s immune system.

About 25,000 organ transplants are performed in the U.S. each year. Despite significant advances in the field, short-term and long-term organ rejection still poses a risk (rejection rates vary depending on the type of organ). The risk of rejection is even higher when the donor is deceased, due to organ damage.

T cells, the white blood cells that identify and attack foreign bodies, are one of the main culprits behind organ rejection. The most potent of these, known as effector memory T cells, are activated by a group of proteins known as human leukocyte antigens (HLAs) on the surface of endothelial cells lining the donated organ’s blood vessels. Researchers can silence the proteins with small interfering RNA (siRNA), a double-stranded RNA that hinders the expression of targeted genes. When delivered conventionally, however, the effects of siRNA last only a few days. A transplanted organ from a deceased donor typically needs weeks to “heal” and reduce the risk of rejection. The siRNA can also cause side effects in endothelial cells of other organs, which don’t need treatment, when administered to the whole body. 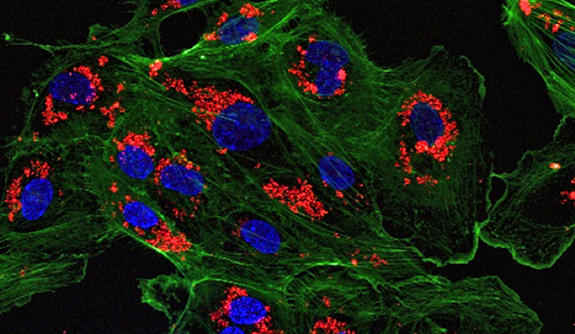 A microscopic image of endothelial cells treated with drug-loaded nanoparticles. (Image courtesy of the Saltzman Lab)

To give the siRNA more staying power, the researchers developed a drug delivery system in which polymer-based nanoparticles carry siRNA to the site of the graft and slowly release the drug. They also developed methods for introducing the nanoparticles into the donor organ before it is transplanted, so that only the organ is treated, not the whole body. The results of their work are published in the journal Nature Communications.

The particles — made in the Yale lab of Mark Saltzman, the Goizueta Foundation Professor of Chemical and Biomedical Engineering — can be tuned for specific properties. Saltzman, who is also a member of the Yale Cancer Center, said these nanoparticles were designed to have a slight positive charge to interact with the negative charge of the siRNA’s nucleic acid. This affinity between the two materials makes the particle a natural carrier for the drug, unlike commercially available nanoparticles that can hold only a limited amount of the drug.

For the study, the researchers treated part of a human artery — a few millimeters in diameter — with the siRNA-loaded nanoparticles and transplanted it into the abdominal aorta of an immune-deficient mouse inoculated with human T cells. The researchers found that the nanoparticles were still present in the donated tissue and significantly silenced the proteins’ expression up to six weeks after transplantation. Additionally, there was no damage to the endothelial cells of untargeted organs.

The first few weeks after the transplant are critical, especially when the organ donor is deceased, said Jordan Pober, the Bayer Professor of Translational Medicine and professor of immunobiology, pathology, and dermatology at Yale.

“If we delay the start of the rejection response, it should be milder and more easily controlled and lead to less late rejection,” said Pober, who is a co-author of the study and also director of Yale’s Human and Translational Immunology program.

Focusing on kidney transplants (by far the most common type of organ transplant performed), Saltzman and Pober are looking to apply the delivery system to a process known as ex vivo normothermic machine perfusion. Developed for kidneys by colleagues at Cambridge University, the process involves pumping warm, oxygenated red blood cells through an organ removed from a deceased donor to repair any damage to the organ before implanting it in the recipient. The Yale researchers plan to add the nanoparticles to the red blood cells to provide controlled delivery of the siRNA to the kidney’s endothelial cells.