Mutations in Single Gene May Have Shaped Human Cerebral Cortex

The size and shape of the human cerebral cortex, an evolutionary marvel responsible for everything from Shakespeare’s poetry to the atomic bomb, are largely influenced by mutations in a single gene, according to a team of researchers led by the Yale School of Medicine and three other universities.

The findings, reported April 28 in the American Journal of Human Genetics, are based on a genetic analysis of in one Turkish family and two Pakistani families with offspring born with the most severe form of microcephaly. The children have brains just 10 percent of normal size.  They also lacked the normal cortical architecture that is a hallmark of the human brain. This combination of factors has not been seen in other genes associated with the development of the human brain, the authors note.

The researchers found that mutations in the same gene, centrosomal NDE1, which is involved in cell division, were responsible for the deformity. 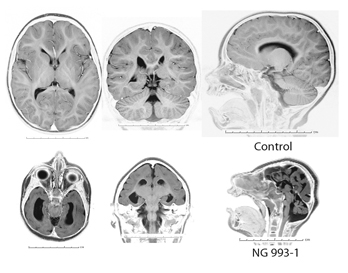 A variety of MRI views of a normal human brain and one from a patient severe case of microcephaly. Image Courtesy of Yale University

The degree of reduction in the size of the cerebral cortex and the effects on brain morphology suggest this gene plays a key role in the evolution of the human brain,” said Murat Gunel, co-senior author of the paper and the Nixdorff-German Professor of Neurosurgery and professor of genetics and neurobiology at Yale.

Scientists from Yale, the University of Cambridge, Harvard and Northwestern universities collaborated on the study with colleagues around the world, including those in Turkey and Saudi Arabia.

“These findings demonstrate how single molecules have influenced the expansion of the human cerebral cortex in the last five million years,” Gunel said. “We are now a little closer to understanding just how this miracle happens.”

The research was funded by the Yale Program on Neurogenetics, the Yale Center for Human Genetics and Genomics, the National Institutes of Health and the Wellcome-Trust.

Mehmet Bakircioglu of Yale was co-first author of the paper. Other Yale authors on the paper are Tanyeri Barak, Saliha Yilmaz, Okay Caglayan and Kaya Bilguvar.