Scientists have captured and studied the collision of two asteroids for only the second time in the history of astronomy. In the May 20 edition of the Astrophysical Journal Letters (currently online), UCLA’s David Jewitt and colleagues report on observations from NASA’s Hubble Space Telescope of a large asteroid that was hit by a much smaller one.

On Dec. 11, 2010, astronomers noticed that an asteroid known as (596) Scheila had unexpectedly brightened and was sporting short-lived dust plumes. Data from NASA’s Swift satellite and Hubble Space Telescope showed that these changes likely occurred after Scheila was struck by a much smaller asteroid, probably in late November or early December. The shape, evolution and content of the plumes enabled the scientists to reconstruct what occurred.

The smaller asteroid crashed into Scheila with the energy of at least a 100 kiloton nuclear bomb. The smallest particles from the collision escaped, and the dust formed plumes. These plumes were barely visible when Hubble observed Scheila two weeks later, and within two months, the plumes were gone completely, along with the evidence that Scheila had suffered a violent collision.

“The Hubble data are most simply explained by the impact, at 11,000 miles per hour, of a previously unknown asteroid about 100 feet in diameter,” said Jewitt, the Hubble team leader and a UCLA professor of Earth and space sciences and of physics and astronomy. 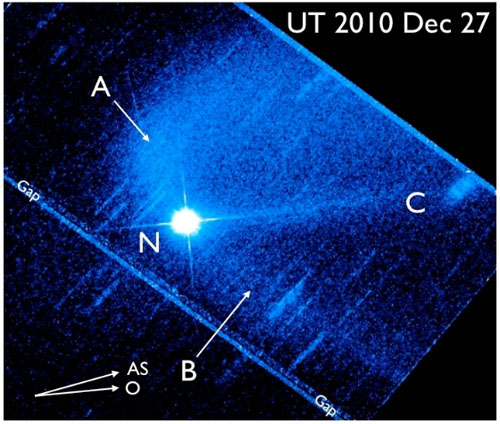 (596) Scheila imaged with the Hubble Space Telescope WFC3 camera on Dec. 27, 2010. The asteroid is marked "N." The crosses emanating from N are diffraction spike artifacts of the Space Telescope. Diffuse regions "A" and "B" show dust grains that have been ejected from Scheila and are being swept back by radiation pressure from the sun. The direction opposite to the sun is marked "AS" (antisolar). The projected orbit is marked "O." "C" marks a thin tail that may be caused by substantially larger particles. Image credit: NASA Goddard Space Flight Center

Asteroids are rocky fragments thought to be debris from the formation and evolution of the solar system approximately 4.6 billion years ago. Millions of them orbit the sun between Mars and Jupiter, in the main asteroid belt. At 70 miles in diameter, Scheila is one of the largest. It orbits every five years, at about three times the Earth’s distance from the sun.

Three days after the outburst was announced, NASA’s Swift Ultraviolet/Optical Telescope (UVOT) captured a spectrum of the asteroid to search for gas but found none. The absence of gas around Scheila led the Swift team to reject alternative scenarios where exposed ice accounted for the activity.

Hubble observations on Dec. 27, 2010, and Jan. 4, 2011, were best explained by a collision with a small asteroid impacting Scheila’s surface at an angle of less than 30 degrees, leaving a crater 1,000 feet across. Jewitt and his colleagues estimated the crash ejected more than 660,000 tons of dust — equivalent to nearly twice the mass of New York’s Empire State Building.

“Previously thought to be beyond the reach of direct observation, collisions are the main process by which asteroids are destroyed and dust is made in the solar system,” said Jewitt, who is a member of UCLA’s Institute for Geophysics and Planetary Physics and lead author of the journal article. “An asteroid collision with the Earth 65 million years ago wiped out the dinosaurs. So, although they’re rare, it’s important to use every example to figure out what happens when two rocks smash together at unimaginable speed.”

Previously, in January 2010, Jewitt’s team used the Hubble Space Telescope to look at the tail of what astronomers thought was an unusual comet but which turned out to be wreckage from the collision of two small asteroids.

NASA’s Goddard Space Flight Center in Greenbelt, Md., manages Hubble and Swift. Hubble was built and is operated in partnership with the European Space Agency. Science operations for both missions include contributions from many national and international partners.