Species facing widespread and rapid environmental changes can sometimes evolve quickly enough to dodge the extinction bullet. Populations of disease-causing bacteria evolve, for example, as doctors flood their “environment,” the human body, with antibiotics. Insects, animals and plants can make evolutionary adaptations in response to pesticides, heavy metals and overfishing.

Previous studies have shown that the more gradual the change, the better the chances for “evolutionary rescue” – the process of mutations occurring fast enough to allow a population to avoid extinction in changing environments. One obvious reason is that more individuals remain alive when change is gradual or moderate, meaning there are more opportunities for a winning mutation to emerge.

Now University of Washington biologists using populations of microorganisms have shed light for the first time on a second reason. They found that the mutation that wins the race in the harshest environment is often dependent on a “relay team” of other mutations that came before, mutations that emerge only as conditions worsen at gradual and moderate rates.

Without the winners from those first “legs” of the survival race, it’s unlikely there will even be a runner in the anchor position when conditions become extreme.

“That’s a problem given the number of factors on the planet being changed with unprecedented rapidity under the banner of climate change and other human-caused changes,” said Benjamin Kerr, UW assistant professor of biology. 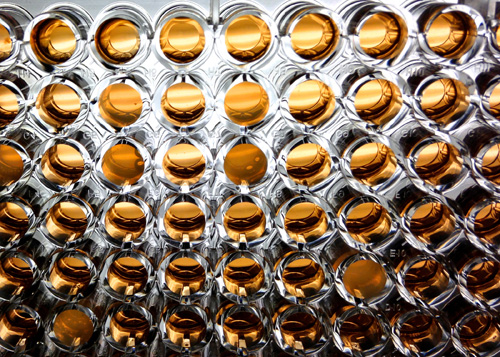 Tiny wells, each about the size of an eraser on the end of a pencil, hold individual populations of E. coli either evolving or succumbing to different levels of an antibiotic which has a red-orange hue. Image credit: S Hammarlund/U of Washington

Kerr is corresponding author of a paper in the advance online edition of Nature the week of Feb. 9.

Unless a species can relocate or its members already have a bit of flexibility to alter their behavior or physiology, the only option is to evolve or die in the face of challenging environmental conditions, said lead author Haley Lindsey of Seattle, a former lab member. Other co-authors are Jenna Gallie, now with ETH Zurich, the Swiss Federal Institute of Technology, and Susan Taylor of Seattle.

The species studied was Escherichia coli, or E. coli, a bacterium commonly found in the lower intestine and harmless except for certain strains that cause food-poisoning sickness and death in humans. The UW researchers evolved hundreds of populations of E.coli under environments made ever more stressful by the addition of an antibiotic that cripples and kills the bacterium. The antibiotic was ramped up at gradual, moderate and rapid rates. 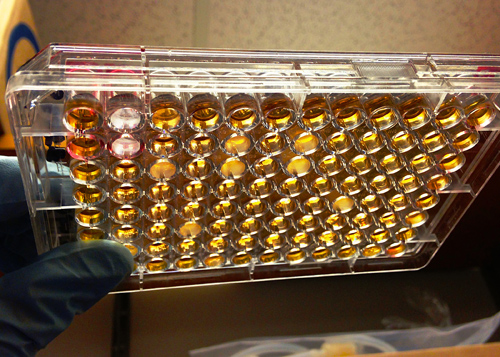 A plate where each small well holds a population of E. coli being subjected to an antibiotic. Wells that are cloudy have fully grown bacterial populations of millions of cells. Wells that are more clear correspond to populations that have gone extinct. Image credit: S Hammarlund/U of Washington

Mutations at known genes confer protection to the drug. Researchers examined these genes in surviving populations from gradual- and moderate-rate environments, and found multiple mutations.

Using genetic engineering, the scientists pulled out each mutation to see what protectiveness it provided on its own. They found some were only advantageous at the lower concentration of the drug and unable to save the population at the highest concentrations. But those mutations “predispose the lineage to gain other mutations that allow it to escape extinction at high stress,” the authors wrote.

“That two-step path leading to the double mutant is not available if a population is immersed abruptly into the high-concentration environment,” Kerr said. For populations in that situation, there were only single mutations that gave protection against the antibiotic.

“The rate of environmental deterioration can qualitatively affect evolutionary trajectories,” the authors wrote. “In our system, we find that rapid environmental change closes off paths that are accessible under gradual change.” 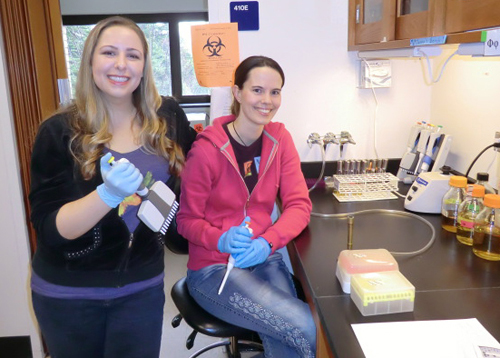 UW researchers Haley Lindsey and Jenna Gallie at work in the Benjamin Kerr laboratory. Image credit: U of Washington

The work was funded by the National Science Foundation, including money through the consortium known as the Beacon Center for the Study of Evolution in Action, and UW Royalty Research Funds.

The findings have implications for those concerned about antibiotic-resistant organisms as well as those considering the effects of climate and global change, Kerr said. For instance, antibiotics found at very low concentrations in industrial and agricultural waste run-off might be evolutionarily priming bacterial populations to become drug resistant even at high doses.

As for populations threatened by human-caused climate change, “our study does suggest that there is genuine reason to worry about unusually high rates of environmental change,” the authors wrote. “As the rate of environmental deterioration increases, there can be pronounced increases in the rate of extinction.”