Mulling the marijuana munchies: How the brain flips the hunger switch

The “munchies,” or that uncontrollable urge to eat after using marijuana, appear to be driven by neurons in the brain that are normally involved in suppressing appetite, according to a new study by Yale School of Medicine researchers in the Feb. 18 issue of the journal Nature.

Lead author Tamas Horvath and his colleagues set out to monitor the brain circuitry that promotes eating by selectively manipulating the cellular pathway that mediates marijuana’s action on the brain, using transgenic mice.

“By observing how the appetite center of the brain responds to marijuana, we were able to see what drives the hunger brought about by cannabis and how that same mechanism that normally turns off feeding becomes a driver of eating,” said Horvath, the Jean and David W. Wallace Professor of Neurobiology and of Obstetrics, Gynecology, and Reproductive Sciences, director of the Yale Program in Cell Signaling and Neurobiology of Metabolism, and chair of the Section of Comparative Medicine.

“It’s like pressing a car’s brakes and accelerating instead,” he said. “We were surprised to find that the neurons we thought were responsible for shutting down eating, were suddenly being activated and promoting hunger, even when you are full. It fools the brain’s central feeding system.” 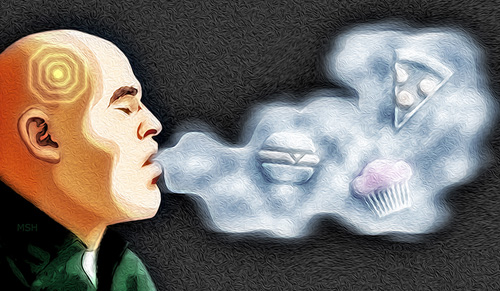 In addition to helping explain why you become extremely hungry when you shouldn’t be, Horvath said, the new findings could provide other benefits, like helping cancer patients who often lose their appetite during treatment.

Researchers have long known that using cannabis is associated with increased appetite even when you are full. It is also well known that activating the cannabinoid receptor 1 (CB1R) can contribute to overeating. A group of nerve cells called pro-opiomelanocortin (POMC) neurons are considered as key drivers of reducing eating when full.

“This event is key to cannabinoid-receptor-driven eating,” said Horvath, who points out that the feeding behavior driven by these neurons is just one mode of action that involves CB1R signaling. “More research is needed to validate the findings.” Whether this primitive mechanism is also key to getting “high” on cannabis is another question the Horvath lab is aiming to address.