COLUMBIA, Mo. – Boron deficiency is one of the most widespread causes of reduced crop yield. Missouri and the eastern half of the United States are plagued by boron deficient soil and, often, corn and soybean farmers are required to supplement their soil with boron; however, little is known about the ways in which corn plants utilize the essential nutrient. Now, researchers at the University of Missouri have found that boron plays an integral role in development and reproduction in corn plants. Scientists anticipate that understanding how corn uses the nutrient can help farmers make informed decisions in boron deficient areas and improve crop yields. 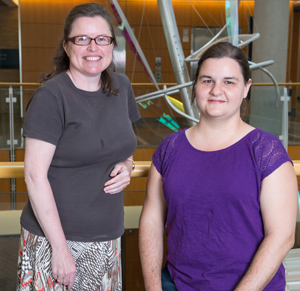 “Boron deficiency was already known to cause plants to stop growing, but our study showed that a lack of boron actually causes a problem in the meristems, or the stem cells of the plant,” said Paula McSteen, associate professor in the Division of Biological Sciences and a researcher in the Bond Life Sciences Center at MU. “That was completely unknown before. Through a series of experiments involving scientists from several disciplines at MU, we were able to piece together the puzzle and reach a new conclusion.”

Meristems comprise the growing points for each plant, and every organ in the plant is developed from these specialized stem cells. Insufficient boron causes these growing points to disintegrate, affecting corn tassels and kernels adversely. When tassels are stunted, crop yields are reduced, McSteen said.

The research evaluated a group of plants stunted by its ability to grow tassels. Kim Phillips, a graduate student in McSteen’s lab, mapped the corn plant’s genome and found that a genetic mutation stunted tassel growth because it was unable to transport boron across the plant membranes, inhibiting further growth in the plants.

Amanda Durbak, a post-doctoral fellow in the College of Arts and Science at MU, also helped prove boron’s usefulness to meristems. She treated two groups of tassel-less corn, one with a boron fertilizer and the other with only water. The group that was treated with boron grew normally, while the group treated with water withered.

Further testing revealed that, at the cellular level, the affected plants’ meristems had altered pectin which is strengthened with boron and stabilizes the plant cell. Without the pectin, plant meristems disintegrate.

Researchers at the University of Georgia and at California State University, Long Beach also contributed to this study. The paper, “Transport of boron by the tassel-less 1 aquaporin is critical for vegetative and reproductive development in maize,” was published in The Plant Cell and was funded in part by the National Science Foundation.